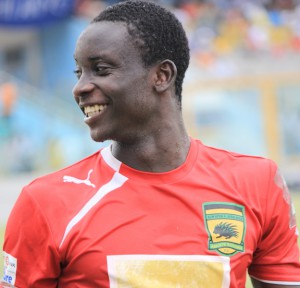 Kotoko striker Dauda Mohammed is set to leave the club on a free transfer, according to multiple reports in Ghana.

The 18-year-old is a product of the club's academy system and has been phenomenal since he broke into the senior team.

Kotoko are reportedly waiting for the representative of the striker, who is unwilling to renew his four-year contract which has expired, media reports have claimed.

If the Porcupine Warriors are unable to reach an agreement and fast, the youngster will leave for free - in a move likely to spark anger among the club's teeming followers.

It's been widely reported that the wunderkid is on his way to Belgian giants Anderlecht with Kotoko expected to move fast or lose him for free.

Leaving on a free transfer is a good bargaining chip for the Belgian powerhouse as they will save money in the business transaction.

However, hell will break loose in Kumasi if the current management are unable to get any financial benefit from the player's imminent sale.

Mohammed netted eight times for the Ghanaian giants in the recently concluded season.