Kotoko should not underrate San Pedro;they are a good side - Former striker Nana Antwi Manu 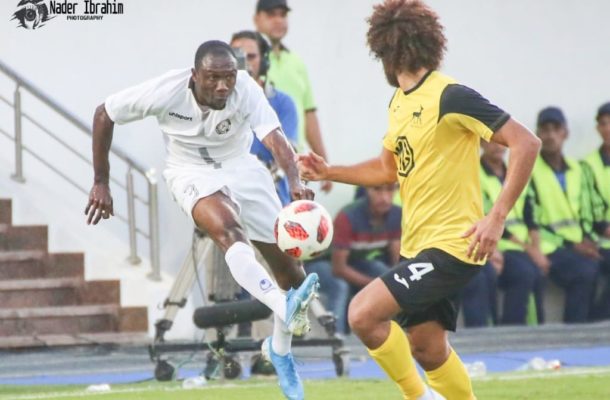 Former San Pedro striker Nana Antwi Manu who now plies his trade with Egyptian side Haras El Hodoud has warned Kumasi Asante Kotoko not to underrate San Pedro Fc as its a young side without any star player.

The ex-Achiken Fc player who played for the Ivorian side for several seasons cautioned the porcupine warriors that they are a young enterprising side with most of their players from their academy.

In an interview with Kumasi based Ash Fm, he confirmed that Fc San Pedro is a very attacking side who can cause any team a lot of problems.

"They don't have any star name or danger man but they are a group of young academy players who are very good on their day.

"Kotoko should not underrate them at all because they can cause a lot of trouble if they belittle them."

"Football has evolved and gone are the days when the name Kotoko will even beat you before you kick a ball.

"Everyone knows how to play the game now so they should be focused and they will beat them " he advised.

The former Achiken FC captain played a key role for San Pedro in the 2018/2019 season helping the club to finish second in the Ivorian Ligue 1 and also an Ivorian FA Cup triumph.

Manu played 20 games, scored 5 goals, made 10 assists and was named man of the match for 8 times in all competitions for the Ivorian outfit last season.

The 25-year-old spent two seasons in the Ghana Premier League with Bechem United before leaving for Ivory Coast after which he moved on to Egypt side Haras El Houdod.