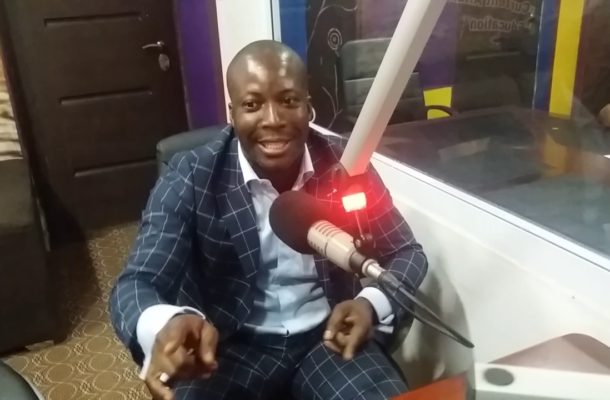 Founder and leader of the Heaven's Gate Ministries, Nicholas Osei, popularly known as Prophet  Kumchacha has lauded the innovative  sex skills of the lady in the viral sex tape.

Prophet Kumchacha said the purported age of the girl in the video who has been identified as Priscilla Tetteh does not match the skills she exhibited in the video.

The controversial pastor who was marvelled at the unusual sex position exhibited in the leaked video involving Robert Sepey, head teacher of Adumanu D/A Basic School and the young lady believed to be a third-year senior high school student said even the mother of the girl will applaud her after seeing the video.

In the 4 minutes 16 seconds video which has gone viral, the lady is seen kneeling on a kitchen stool with her hands placed on the floor while Mr. Sepey stood behind her and squatted for easy penetration and thrusting.

“Yeah, nice one… I want you to fuck me to my satisfaction. Fuck me to the extent that I’ll feel it within my soul,” said the lady.

Reacting to the story, Kumchacha described her as a naughty girl. He posited that the mother of the student will be extremely overwhelmed by the sex position and her daughter’s ability to accommodate the heavily endowed head teacher.

“The sex position doesn’t match her age. Anyone who watches the video will know that she’s a spoilt child. What! Kneeling on a kitchen stool? I haven’t seen such a position before. I’m sure her mother will even applaud her for being adventurous because she [the lady] has done what the mother can’t,” he said on Kofi TV.