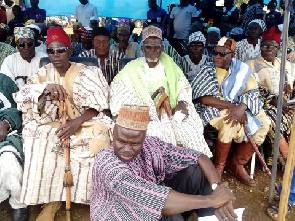 Kusasis in Bawku have levelled strong accusations at the presidential candidate of the New Patriotic Party (NPP), Nana Addo Dankwa Akufo-Addo, for what they say could plunge the area back into the ethnic warfare that once tore the municipality and its environs apart.

There is a decades-long power struggle between the Kusasi and the Mamprusi factions over who is the legitimate ruler of Bawku.

The current gazetted paramount chief of the area, Naba Asigri Abugrago Azoka II, hails from the Kusasi group. The Mamprusis in the area, for reasons embedded in historical issues, largely do not recognise him as the overlord of Bawku and have persistently referred to a regent of the Mamprusi ancestry in the area as their traditional leader since the early 80’s.

A programme drawn for the recent campaign tour of the Upper East Region by the party’s flagbearer, which was circulated among media houses and supporters of the party ahead of the tour, got the Kusasis very angry for featuring a regent in Bawku as among the traditional authorities the candidate was to visit.

Pointing at the Paramount Chief of Bawku, Naba Asigri Abugrago Azoka II, the furious-looking natives of the area say Bawku already has a chief and, for that matter, any reference to a regent in the area (which means an acting chief in the absence of a substantive chief) is a well-rehearsed mischief aimed at turning Bawku on its head once more.

“You are recognising an illegal person as a chief, when there is a chief who has been gazetted, who has become the president of the regional house of chiefs before. You go to him and, then, you say you are going to a regent. How can you go there? You say you are a potential president and you are inciting trouble for the area.

“If you say that there is a regent, it means that you don’t recognise him (the Paramount Chief of Bawku) as a chief. And the one who is posing as a regent says he is the acting chief of Bawku,” a well-known opinion leader in Bawku, Daud James Abang-Gos, told Starr News.

At least 182 people, including women and children, lost their lives with several people critically injured in the area after the conflict exploded in 2007.

More than 80 houses went up in red flames. Countless residents relocated to other municipalities and districts in the region. And prolonged curfews that came intermittently in extremely harsh measures brought trade and civil service delivery to their knees in the municipality and beyond as soldiers patrolled everywhere.

The ailing municipality is on a recovery road from years of unrest to lasting peace today. But the recent controversial reference and recognition accorded the "regent", according to Mr. Abang-Gos, could derail the peace process and return the area to where it restarted late in 2007.

“Bawku Naba is scandalised. He’s threatened by that move. It’s like paying a courtesy call on President Mahama and, then, saying you are going to pay a courtesy call on acting president, Akufo-Addo. Can you imagine the anger not only from the president but also from his people? That is the scenario.

“It can ignite trouble. And if there is trouble in Bawku, Akufo-Addo and the NPP should be blamed. When Kufuor was president, he never did that. That was a responsible leader. You have not become president, you are pouring petrol on fire, meaning we should continue fighting; then, you will come and settle the fight. That is the implication,” he said.

The two conflicting ethnic groups are perceived to be politically polarised, with the Kusasis seen to be more comfortable with the National Democratic Congress (NDC) in power and the Mamprusis absolutely sure they will enjoy greener pastures of freedoms under any NPP government.

The supposed political affiliations are linked to some alleged deeds of interference in the old ethnic conflict from the two political parties in the remote past. Nonetheless, there are those from the two conflicting sides who devotedly support the same parties which their ethnic groups are perceived to dislike.

“Bawku occupies a strategic position in the country such that if there is no peace, it affects a number of people within Bawku, at the regional level and in the country as a whole. If they transfer somebody to Bawku, that person does not want to report. The amount of money we spend on security, to fuel and maintain armoured cars, is huge,” the Municipal Chief Executive, Issaku Bukari, once told the youth of the area.

Too many arms in the illegal custody- police

Police say there are "too many" fire arms in illegal possession of civilians in Bawku. Government in 2012 urged residents of the area who had firearms in illegal custody to voluntarily surrender them for a cash amount of Gh¢3,000. But despite the promised reward, which was backed by an assurance from security agencies to protect the identity of anyone who cooperated, only three people reportedly have turned in their weapons so far.

The Bawku Inter-Ethnic Peace Committee, a board instituted in 2010 to foster peace through dialogue, had until recently seen repeated withdrawal of the Mamprusi representatives from the working group following government’s restrictions on the celebration of the Damba Festival in Bawku for security reasons.

The reference to a regent in the itinerary printout, for the enraged Kusasis, was meant to spite them and to deliberately contest the overall authority of the Paramount Chief of Bawku.

But, speaking to Starr News, the NPP’s leadership in the region says the reference was a slip.

The party’s regional executives initially declined to remark when contacted by Starr News for explanations, saying the issue was too sensitive. Afterwards, the party’s Upper East Regional Chairman, Murtala Ibrahim Mohammed, who strongly distanced himself from telling how the controversial title of regent managed to creep into the campaign schedule, asked the regional secretary to speak on his behalf.

“At Bawku Naba’s palace, the Bawku Naba himself complained about it. And the presidential candidate said they [were] things that belonged to history and [that they] who are living today would solve them. As to why that programme was kept there, please, I don’t think I’m the best person to go into that detail.

“You know how delicate that matter is. I beg you; I would not want to comment on that issue. The presidential candidate himself apologised and said we would correct our things as time goes on. So, we want to believe that it was a mistake made and we would correct ourselves,” the party’s Upper East Regional Secretary, Cletus Ayambire, who also had previously turned away from speaking to the issue, finally said.