Kwabena Agyapong speaks on why he supported Akufo-Addo against Kufuor 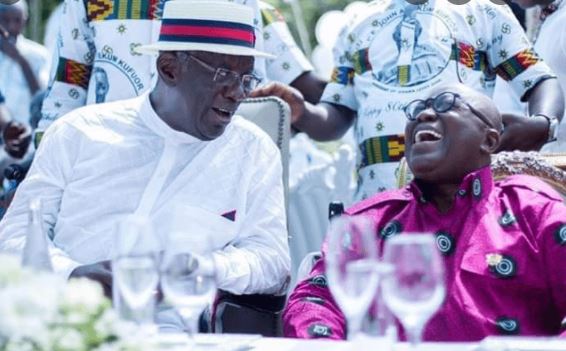 After losing the December 10, 1996, presidential election to the late President Jerry John Rawlings, John Agyekum Kufour had to beat stiff opposition to regain the approval of the New Patriotic Party for the flagbearership position in the December 2000 elections.

Kufour’s second attempt to lead the NPP in a national election received stiff competition from Nana Addo Dankwa Akufo-Addo who was supported by a block within the NPP referred to as the G15.

A member of the ‘anti-Kufour’ team, Kwabena Adjei Agyapong has shared his reasons for backing an Akufo-Addo ticket against John Agyekum Kufuor in the NPP’s October 23, 1998, presidential primaries.

In an interview with Paul Adom Otchere on his Good Evening Ghana show, Kwabena Agyei, a former General Secretary of the NPP said he feared John Agyekum Kufuor’s gentle personality was a disadvantage as compared to a tough-vibrant persona carried by a then young Nana Addo Dankwa Akufo-Addo.

He stated that his conviction was on the back of the leadership witnessed under the then President Jerry John Rawlings and the need for the NPP to boot his National Democratic Congress out of power.

“Me personally, I thought that the way we lost the 96 elections and knowing Rawlings, the type of person he was; from his military background, the dictatorship he had imposed on the country. I thought Kufour was a bit too gentle. He is known as the Gentle Giant, some of us thought that we needed a very tough person to take on...

“So that is really the motivation. At that time Akufo-Addo was about 51-52, vibrant and young and tough; maybe this is the man to take out Rawlings,” he said.

He noted that even though President Rawlings was bound not to contest in the elections, it was imperative to see him as the target as he was the representative figure of the NDC.

“Although that was his (Rawlings’) second term, defeating the NDC was like defeating the NDC. Because he was the figure conducting the elections, the campaign and everything and that was really the motivation,” he added.

He emphasied that there was therefore the need for the NPP to have a candidate with the personality of Nana Addo to face off the NDC.

Some members of the G15 named by Kwabena are Dr Kwame Donkor Fordjour who was the leader, Daavi Ama, Courage Quashigah, and JH Mensah.

On October 23, 1998, however, Kufour beat Akufo-Addo’s competition and was re-nominated by the New Patriotic Party not only to run again for president but also to officially assume the position of Leader of the party.

Kufuor won the presidential election of December 2000 but had to do that in a run-off vote.

In the first round, held on 7 December, Kufuor came in first place with 48.4%, while Prof. John Evans Atta Mills who was vice president to Rawlings, came in second with 44.8%, forcing the two into a run-off vote.

In the second round, held on 28 December, Kufuor was victorious, taking 56.9% of the vote. The swearing in of President Kufuor on January 7, 2001, marked the first time in Ghana's history that an incumbent government had a peaceful transition of power to the opposition.