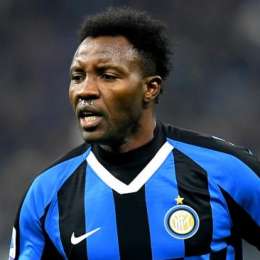 Ghanaian star Kwadwo Asamoah has congratulated his Inter Milan teamates on their victory over Cagliari in the Italian Cup.

On his Instagram, Asamoah hailed the teamwork that saw them walloping Cagliari by 4-1.

Inter, which last won the trophy in 2011, will face either Fiorentina or Atalanta, who play Wednesday.

Antonio Conte’s side dominated from the start and took the lead after just 22 seconds when Lukaku capitalized on an error from Cagliari midfielder Nahitan Nandez.