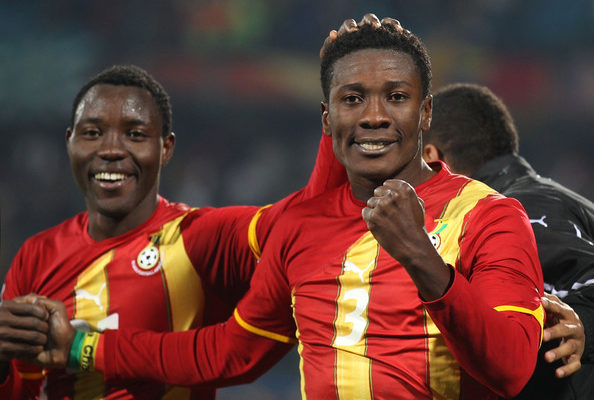 Asamoah, who plays for Serie A giants Inter Milan, is expected to be handed the armband as he marks his return to the Black Stars after a four-year absence.

The 29-year-old has been named in Ghana's 23-man squad for next month's 2019 Africa Cup of Nations qualifier against Kenya, a leaked document has revealed.

Circling media reports claim Black Stars coach Kwesi Appiah has made up his mind to make Asamoah the leader of his team - and will wear the armband for the 2019 Africa Cup of Nations qualifier against the Harambee Stars in an audition role.

Gyan's troubles with injuries and the decision to axe brothers Andre and Jordan Ayew from his squad in recent matches, means he will build his team around the former Juventus versatile man.

Atletico Madrid midfielder Thomas Partey has been handed the role on an interim basis but the 25-year-old has downplayed his chances of replacing the iconic Asamoah Gyan.

Partey has also enjoyed the backing of former Chelsea legend Michael Essien for the leadership role, but it appears Appiah is determined to build a crack team devoid of 'premadonnas' who threaten harmony in his bid to end the country's 37-year wait for an African Cup of Nations title.

Coach Kwesi Appiah sees Asamoah as a leader who can inherit the armband from record goal-scorer Asamoah Gyan.

Details are sketchy as officials remain tight-lipped on the mounting reports in the West African nation.

Appiah has kept to his earth-shattering decision of dropping brothers Andre and Jordan Ayew from his squad since the 2018 World Cup qualifier against Uganda in October last year.