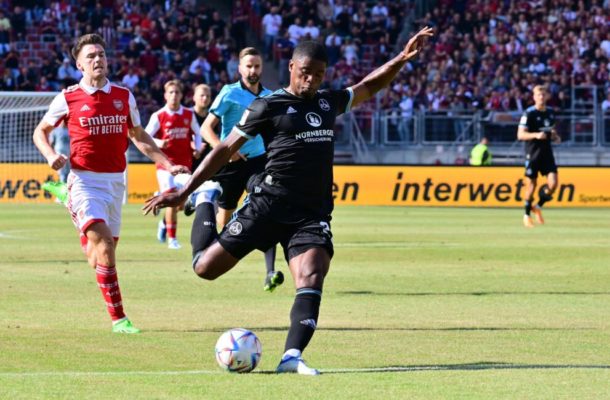 London-born Swiss Ghanaian Kwadwo Duah was on the scoresheet for his German side FC Nurnberg in a pre-season friendly match on Friday.

Despite the goal, his side was brushed aside by the English Premier League side as they came back from behind to win 5-3 with new signing Gabriel Jesus hitting a brace.

The German side opened the scores in the 24th minute through Johannes Geis in the first half before  the Ghanaian striker added the second goal moments later.

Johannes Geis struck powerfully from outside the area, in off the crossbar. There was plenty of pace and movement on the shot, deceiving Turner in the Arsenal goal.

Arsenal went into the break 2 goals down but that quickly changed as the introduction of Gabriel Jesus, Mohammed Neny and others changes the game.

With his first touch the  Brazilian signed  from Manchester  City made it 2-1 for Arsenal before El Neny scored a worldie of a goal.

Inside an hour Arsenal took the lead after another excellent move, a deep cross was destined for Jesus’s head, only for German-born Ghanaian defender Christopher Schindler to stretch out a boot and turn the ball past his own keeper. to make it  3-2 for the gunners.

Nketiah’s shot cannoned back off the cross bar, hit Nurnberg defender Tim Handwerker for an own goal to make it 4-2.

Nurnberg substitute Lukas Schleimer momentarily pulled it back to a single goal deficit, but Jesus soon claimed his second of the afternoon, from a Gabriel Martinelli cross, to make it 5-3 for Arsenal.