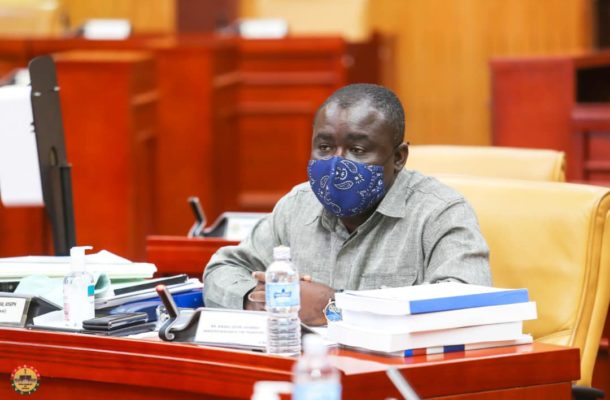 Minister-designate for Transport and Aviation, Kwaku Asiamah has clarified issues pertaining to the agreement between the Government of Ghana and Frontiers Health Care Limited for COVID-19 testing at the Kotoka International Airport.

The Minority had raised concerns about the agreement, saying it breaches the procurement laws of the country and lacks transparency.

Several ministerial nominees who appeared before Parliament’s Appointment Committee claimed they were not privy to the agreement.

Kwaku Asiamah during his vetting by Parliament’s Appointment Committee however disagreed with the concerns raised by the Minority.

He said Frontier Healthcare Service Limited had demonstrated that they had the capacity to undertake COVID-19 tests at the airport and had their equipment duly certified by the Food and Drugs Authority.

“Per the information I have, Frontier Healthcare is a registered company in Ghana. The brief I have from Ghana Airports Company Limited was that Frontier Healthcare approached them and proved that they have the capacity to under the [COVID-10 tests at the airport]. Their equipment was certified by the FDA after it was forwarded to them by the Ghana Airport company.”

Non-ECOWAS passengers coming to Ghana by air are required to pay $150 for a 30-minute PCR COVID-19 test administered by Frontiers Health Care Limited.

ECOWAS citizens currently are allowed to pay $50 for the test at the Kotoka International Airport.

The Minister-designate expressed his willingness to engage with Frontier Healthcare Services to reduce the cost of the tests, which has been described by some stakeholders as outrageous.

“Anything that will make Ghanaians satisfied, I will do it. If people are complaining that the cost [of the test] is too much I will sit with [Frontier Healthcare Services] if I am given the nod, interrogate the figures and if it’ll be possible for them to reduce the price, why not. If we can negotiate with them, we’ll do that.”

The test being used has been backed by the Food and Drugs Authority (FDA) which it says met the requirements of not less than 99.0 percent concordance.