Kwame Opoku rescues a draw for Kotoko in Sogakope 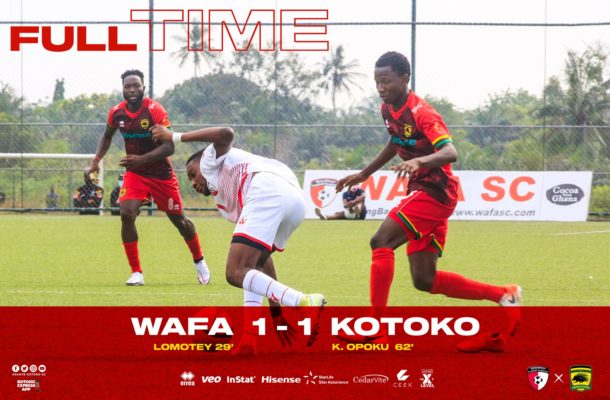 It was another goal for Kotoko striker Kwame Opoku as he rescued a draw for his side at a slippery grounds in Sogakope.

Kotoko managed to pick a point in what was an entertaining 1-1 drawn game in the match day nine clash.

The porcupine warriors have been in good form recently winning against Liberty Professionals in their last game while WAFA lost to Legon Cities.

It was the home side who started the brighter of the two sides making clear of their intentions as Kotoko struggles initially.

But Kotoko were resolute as they withstood whatever was thrown at them by WAFA but it did not take long when the Leagues top marksman Daniel Lomotey prodded home the opener from a goal mouth scramble inside the Kotoko box in the 29th minute.

The home side went into the break with a solitary goal lead but Kotoko returned from the break the hungrier of the two sides.

Kotoko soon equalized through Kwame Opoku in the 62nd minute of the game after he was put through on goal for his sixth goal of the campaign.

Both sides pressed on for that elusive winner and had to settle for a point apiece in a cagey game.