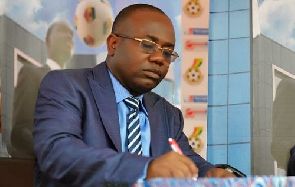 Former Ghana Football Association (GFA) President, Kwesi Nyantakyi, has announced that he will appeal to sports highest court to overturn his life-time ban from all football related activities.

The 50-year-old has asked his lawyers to appeal Tuesday's decision by the FIFA Ethics Committee at the Court of Arbitration of Sports (CAS) in Switzerland.

Nyantakyi was handed a life ban from all football-related activities by FIFA on Tuesday after being found to have violated of the governing body’s ethics code, including bribery and corruption.

The former FIFA Council member was found guilty after being filmed by an investigative journalist in a hotel room allegedly taking a $65,000 bribe from a supposed businessman.

The former CAF Vice President revealed his sadness over the decision insisting his lawyers will appeal at CAS to have the case re-examined.

"I wish to express my shock and deep sadness after receiving the decision from the FIFA Ethics Adjudicatory Committee on Tuesday," Nyantakyi said in a statement on Wednesday.

"My legal advisors are under my instructions to urgently appeal the decision as I think it was unfair, harsh and unwarranted.

"I will use all the legal channels available to seek redress and establish the facts I presented to the committee.

"Even though I have already resigned from all my football positions, it is important I establish the facts with the sole aim of clearing my name.

"At this moment I am unable to provide any further details as my lawyers are reviewing the facts for appeal at the Court of Arbitration for Sport (CAS)."

Despite the various allegations against him, Nyantakyi has received sympathy from several top officials in football in his country as well as football fans in Africa who think the decision is harsh.

"I wish to express my sincere gratitude to the people of Ghana, Africa and indeed across the globe for the overwhelming support and outpouring of sympathy," Nyantakyi said.

Nyantakyi, who was also a former vice-president of the Confederation of African Football, resigned in June after a recording by undercover journalist Anas Aremeyaw Anas appeared to show him demanding kickbacks to pass on to top government officials, including the presidency.

Nyantakyi later apologised to Ghana president Nana Akufo-Addo and the government for what he called his “indiscretion”.

He denied any wrongdoing regarding match fixing.

The scandal, along with undercover footage that showed numerous match officials receiving bribes, forced the suspension of the Ghana Premier League in June, which has still not resumed.

Former Ghana Football Association (GFA) board member Kofi Amoah was placed in charge of a four-member normalisation committee in September that was tasked with steering the affairs of football in the country for the next six months.