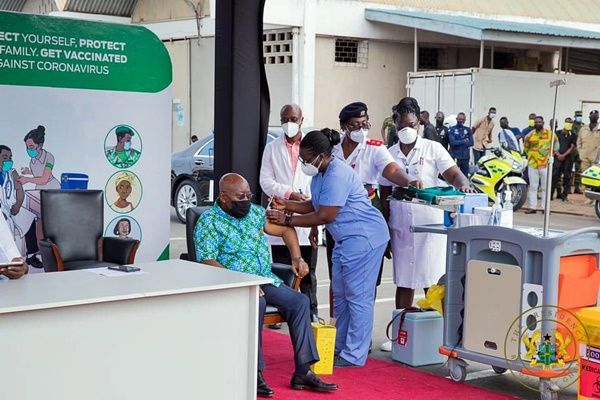 President of the Republic of Ghana, Nana Addo Dankwa Akufo-Addo and First Lady Rebecca Akufo-Addo on Monday, March 1 took their doses of the COVID-19 vaccines.

The vaccines are aimed at curbing the deadly viral disease and according to government rollout plan, they will be first administered to frontline health workers, government officials and media practitioners among others.

About 20 million Ghanaians have been targeted to receive the vaccines nationwide.

Following the President were Vice President, Dr. Mahamudu Bawumia and his wife Samira Bawumia who also took their doses on Monday.

The President and Vice President including their wives' vaccination was televised live on national screens as part of public education.

Speaking on Peace FM's "Kokrokoo" on Tuesday, March 2, seasoned Journalist Kwesi Pratt applauded the President and the Vice President as well as their wives for showing exemplary leadership.