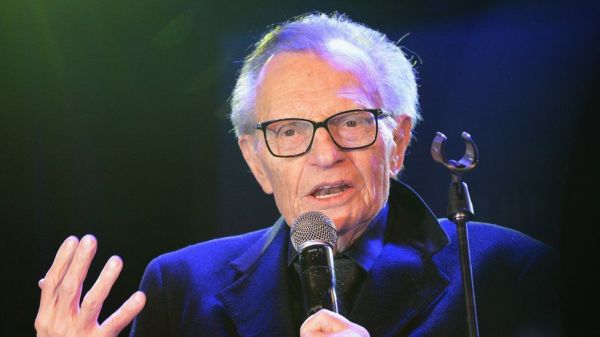 Larry King, the celebrated television and radio host, has died at the age of 87 weeks after contracting coronavirus.

'With profound sadness, Ora Media announces the death of our co-founder, host, and friend Larry King, who passed away this morning at age 87 at Cedars-Sinai Medical Center in Los Angeles.'

In early January it was revealed King was in the hospital with the virus.

Described as the 'Muhammad Ali of the broadcast interview;' King conducted over 50,000 high-profile talks with presidents, world leaders, Hollywood royalty and sports stars during the course of his career that spanned over six decades.

His trademark suspenders and unmistakable voice were ubiquitous in millions of living rooms around the world that tuned in to watch his nightly talk show on CNN, 'Larry King Live.'

Married eight times, King was preceded in death by two children and survived by his estranged wife, Shaun Southwick and three children. His passing highlights his remarkable life journey from a Depression-era Brooklyn boy to the legendary 'master of the mic.'

The tragic death of his father led to economic hardships for King, his widowed mother and younger brother Martin. The family was forced to relocate to Bensonhurst and live off welfare programs that enforced the humiliating practice of routine visits by government employees to inspect and ensure that the family was living within its means. Grade 'A' meat was strictly forbidden.

'Even though I'm a very forgiving person, if there is a God, I'd have a tough time forgiving Him,' King shared. Despite his strict Orthodox upbringing, he never practiced again, 'I'm very Jewish socially. 'I love Jewish humor, I love Jewish food, I like being Jewish, but I'm not religious.'

He was working in the mailroom of a midtown Manhattan merchandising company that happened to share the same building as the CBS- WOR radio station. 'Almost five or six times a day I would take the elevator up to the 22nd floor and pretend that I was an announcer. Like going down in the elevator to go out to lunch,' he wrote in his biography. 'And sometimes when I'd get on the elevator, some announcers would walk on. And I'd hear them talk, and I just wanted to do that. I just wanted to be that.'

Finally, 22-year-old King worked up the courage to introduce himself to one of the radio announcers and asked for career advice on how he could break into the industry. The announcer suggested he move to Miami where a budding media market offered more opportunities for inexperienced broadcasters.

He packed his bags, bought a bus ticket to Florida, 'and started knocking on doors.' After passing a voice test at WAHR, King was hired -- but only as a janitor (at first). He accepted the job with the stipulation that when an on-air position opened, he would be the first to get it.

That opportunity came about quickly after one of the station's disc jockeys abruptly quit; making King's debut on radio a baptism by fire. Mere minutes before he was set to go on air, Larry's boss demanded he pick a new stage name that was easier to remember and sounded less 'ethnic.' He chose the surname 'King,' which he pulled from an advertisement in The Miami Herald for 'King Wholesale Liquor.'

Gripped by fear, the novice announcer completely froze when the mic he so longed for was finally open. After five excruciatingly long minutes of dead airtime, his boss stormed into the booth and shouted: 'This is the communications business, so communicate!'

King timidly turned on the mic and said: 'Hi, my name is Larry King. All my life I wanted to be on the radio. Well, here I am and I'm frightened.'

Larry Zeiger became Larry King on May 1, 1957 and and never stop talking from that day forward.

Miami Beach, then entering its peak as a resort town, was crawling with celebrities; many of which dropped by WKAT to appear on Kings talk radio show which was broadcast live every morning from Pumpernik's Restaurant. This was King's version of a college education as he interviewed everyone from a local plumber to Jimmy Hoffa, Lenny Bruce, Ella Fitzgerald, Hubert Humphrey and Richard Nixon. Bobby Darin was King's first celebrity guest.

It was in these exciting early years that King remembers his first and only encounter with John F. Kennedy. Or as King put it, he 'ran' into him. Not as in 'saw him shopping' he wrote in his autobiography, but as in, 'rammed his convertible with a ratty old car.'

It was 1958 and the soon-to-be president was America's most famous senator at the time. King, a self-described 'dumb kid' from Brooklyn was driving and distracted by Palm Beach's dazzling shops along Worth Avenue. 'How could you?' he shouted. 'Early Sunday morning, no traffic, not a cloud in the sky, I'm parked — how could you run into me?'

'All I could say was, 'Senator, do you want to exchange information from our driver's licenses?'' said King. 'Eventually he calmed down, and he said he'd forget the whole thing if we just promised to vote for him when he ran for president. We did, and he drove away — though not before saying, 'Stay way behind me.''

Soon King's popular morning show evolved into a nightly three hour radio block that was hosted live from the Surfside 6 houseboat (used on the popular ABC television series) between 9pm and 12 during the week. Adding to his workload, King made his television debut in 1964 with a late night talk show that aired on Channel 10 every Sunday at midnight where he moderated debates on important issues of the day.