Latif Blessing still eyes playing for the US 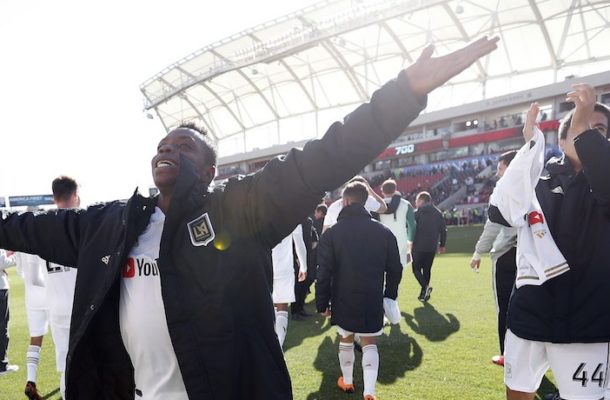 Ghana could lose the services of Latif Blessing after the former Liberty Professional star made a statement suggesting he still have the "dream" to play for the US.

A push for American citizenship backed by the desire to wear the US jersey could see the Black Stars losing another asset, who won the 2015/16 Ghana Premier League  goal king.

Blessing,who was subsequently adjudged the Most Valuable Player of the 2015/16 Ghana Premier League is yet to be capped by Ghana.

He was included in the provisional Ghanaian squad for the 2017 Africa Cup of Nations, but wasn’t selected for the final 23-man roster

Reportedly frustrated at a lack of call-ups for the Ghanian national team, the former Liberty Professional striker is hinting at the possibility of one day playing for the US national team.

In response to a picture posted on Instagram of a USA jersey with Blessing and No. 7 on the back, Blessing wrote “#DREAM” followed by three American flags, “heart emoji IS GOD.”

“I am ready to switch nationality and play for USA. I’m not focused on the Black Stars because I have done enough to merit an invite but to no avail,” Blessing told Happy FM in January. “One man's poison is another man's food, so if I don't get chance to play for Ghana and USA offer me the opportunity, I will grasp it with my two hands.”

But his suggestion was dismissed by the then Chairman of the Black Stars management committee George Afriyie, who said blessing was just speaking out of frustration

Blessing is through the first hurdle, obtaining his green cardin Nov. 2017, but he would still need to obtain US citizenship, and then file the proper paperwork with FIFA to become eligible, a process that will take several more years to complete.

A year after scoring three goals in 25 league appearances for Sporting Kansas City, Blessing has blossomed under Bob Bradley with five goals in 19 appearances — 14 starts.