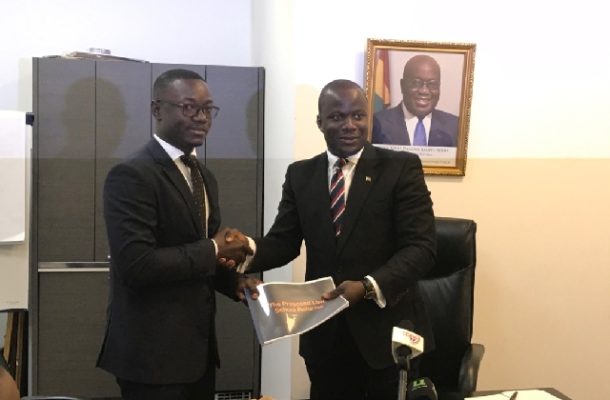 Deputy Chief of Staff, Abu Jinapor receiving petition on behalf of the president

Leadership of the National Association of Law Students have finally  presented a petition to President Nana Addo Dankwa Akufo-Addo at the Jubilee House.

The petition which was received on behalf of the President by  the Deputy Chief of Staff, Mr Samuel Abu Jinapor comes after the students marched in protest to call for reforms of the law education.

The members of the association failed to present the petition on 7 October 2019 after the Ghana Police Service used water cannons and tear gas to disperse them as they approached the ceremonial entrance of the seat of Ghana’s Presidency after a peaceful march from the Ghana School of Law.

The students are requesting that he give urgent consideration to it and expedite action on their demands.

Addressing the Deputy Chief of Staff in his office before the formal presentation of the petition, the leader of the delegation and SRC President of the Ghana School of Law, Mr Jonathan Alua, said it is the expectation of law students in Ghana that the President will deal with their concerns with all the urgency it deserves and within reasonable timelines.

The protest by law students in Ghana followed the massive failure recorded at the Ghana School of Law's 2019-2020 academic year entry examination, as only 128 students out of 1,820 passed.