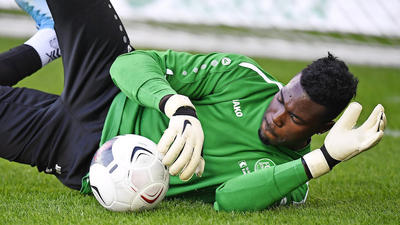 Ghanaian International LawrenceAti Zigi has become an instant hit at St Gallen, proven to be the master safe hands for just a month after joining the Swiss side.

The 23-years-old joined the Swiss side, St. Gallen, from French Ligue 2 side, Sochaux in January and his early-days performances has won him much trust.

He has taken the hearts of fans by storm, with splendid performances.

A report by the suedostschweiz.ch says the black panther from Accra - St. Gallen’s new crowd favorite.

"The teammates also rave about the 23-year-old Ghanaian," the report said.

"He is nimble like a big cat, has keen senses and controls his territory."

Ati-Zigi, who was valued at 300,000 Euros made 16 appearance for the French side since joining the club from Austrian giants Red Bull Salzburg in July 2017.