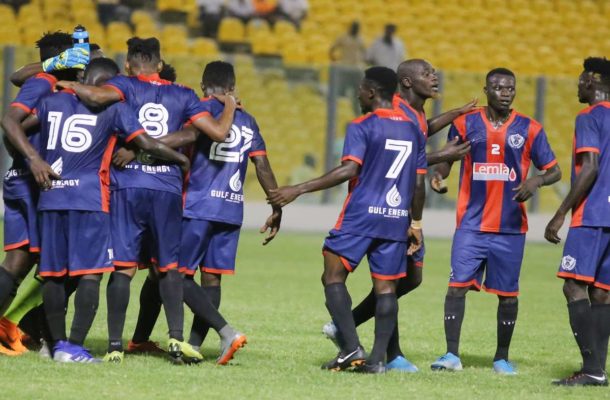 There was no dull moment at the Accra Sports Stadium as it rained goals when struggling Legon Cities brushed aside Ashantigold with ease to record a resounding 5-2 victory.

It is only their second victory after ten round of games this season after beating WAFA by a lone goal at the same venue.

The royals did not start the game too well and National team goalie Fatau Dauda will be reeling from the gaffe that gifted Yaw Anorl the opening goal of the game on the 6th minute after fumbling with a routine clearance.

Three minutes later, the royals restored parity through Nasiru Moro thunderbolt of a strike from about 22 yards.

Yaw Annorl who was a thorn in the flesh of the Legon Cities backline scored his second goal of the night in the 31st minute to make it 2-1 but Jonah Attoquaye pulled parity for the home side on the stroke of half time to make it 2-2.

Four minutes after restart, Baba Mahama gave Legon Cities the lead for the first time in the game with a superb strike to make it 3-2.

Two quick goals from David Cudjoe gave the royals a resounding 5-2 victory over high flying Ashantigold and what was only their second win all season.

Deep in stoppage time the miners got a penalty but Yaw Anorl's shot was saved by goalkeeper Fatau Dauda as they held on to a priceless victory.