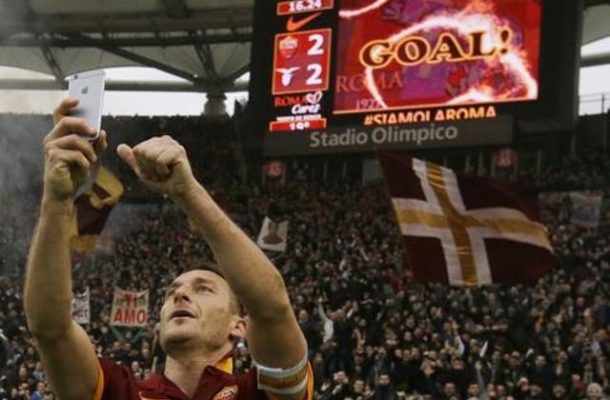 Totti, who made his Roma debut in March 1993 and hit his 250th goal for the club on Sunday, celebrates his 40th birthday on Tuesday.

Amid worldwide praise, Barcelona and Argentina star Messi said in a special video: “Hi Francesco, I just wanted to wish you a very happy birthday.

“I hope you have a wonderful day. I’ve always admired you, and even more so on the day I met you. A big hug!”

Totti, who has spent his entire career at Roma, is in his 25th and likely last season with the ‘Giallorossi’ (yellow and reds).

Totti his scored six times in his last 11 league games and is currently fifth in the league’s assists table despite playing only one full game in six outings this season.

Bolt met Totti last year, and on Tuesday the Jamaican posted a special birthday message for the footballer on Youtube.

“Hi Totti, this is Usain Bolt. I just want to wish you a happy birthday, from one legend to another. It was an honour when I met you,” Bolt said.

Totti is one of only two players to have hit 250 goals in Serie A, although he remains 24 short of Silvio Piola’s all-time Serie A record of 274.

But his loyalty to Roma means he is among a “dying breed” of footballers, according to former club-mate Sebino Nela.


“Totti is a one-club man, a dying breed in modern football and that’s what makes him such an asset for the club,” said Nela, who played for Roma for more than a decade between 1981 and 1992.

Totti took the captain’s armband from Brazilian defender Aldair under pioneering Czech coach Zdenek Zeman in 1998, and never looked back.

Two seasons later, he helped end Roma’s 18-year wait for the Serie A title. When Roma weren’t winning, he was stunning rivals with an astonishing array of skill and goal-scoring.

Totti has goaded rival teams with provocative messages on T-shirts and last year hit the headlines after celebrating a brace against bitter city rivals Lazio by running to the ‘Curva Sud’ and using a telephone to take a selfie with thousands of fans in the background.

Totti also helped Italy to their fourth World Cup triumph in 2006 when he played alongside former Lazio defender Fabio Cannavaro.

“Francè... I want to be close to you on this special day. Happy 40th Birthday!” said Cannavaro.

Totti also remains the oldest player to score in the Champions League, having beaten Joe Hart from the penalty spot to hit the leveller in a 1-1 draw at Manchester City three days after his 38th birthday in 2015.

Perhaps fittingly, it was against Hart that Totti scored his 250th Serie A goal on Sunday, the Roma legend beating the on-loan Torino goalkeeper from the penalty spot in a 3-1 defeat in Turin.

“I’m proud and happy to have played alongside you: keep on producing the magic, you’re the greatest number 10 Italian football has seen.”