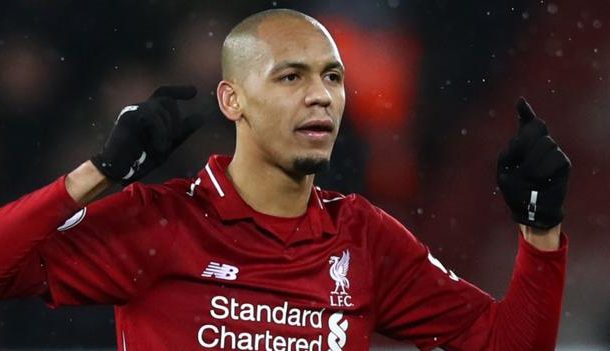 Fabinho could not even get in the Liverpool team until a few weeks ago, but his performance in Sunday's win over Manchester United was a demonstration of his growing influence on Jurgen Klopp's side.
I see his role for the Premier League leaders as being a specialist position, and it is one he does extremely well.
The Brazil midfielder sees passes and reads play very well, which is why he is very good at using his long legs to make interceptions.

He is not afraid to put his foot in and make tackles either and he has already adapted to the physicality of the English game.
But the really impressive thing about him against United was his passing, which was a part of his game I had been unsure about following his £39m move from Monaco in the summer.


Fabinho had 83 touches against United and made 66 passes - only Georginio Wijnaldum (79) and Roberto Firmino (70) made more. He also had five shots, with two of them on target.During Liverpool's draw at Arsenal at the start of November, I noticed Klopp was going mad about Fabinho's long passing and was telling him to keep it simple.
Klopp just wanted him to pass it short, rather than trying ambitious balls and losing possession, and I wonder if the reason the 25-year-old was in and out of the team so much was because he had to learn about his manager's way of playing.
That is no longer the case - he has started six of Liverpool's past eight Premier League games - and his passing against United was superb.
He kept it simple most of the time but if he did see a forward pass it was punched in and he made it count - like his perfectly weighted assist for Sadio Mane to score the Reds' opener.
Klopp has managed him very carefully over the past few months, in a similar way to how Andy Robertson had to wait to get into the team last season. Klopp does not pick you until you are ready.
Fabinho was always going to have to play at some point because of injuries, and because of Liverpool's high-tempo style of play.
When he did come in the important thing was for him to show he has listened to Klopp and understands what he wants - and, against United, he did everything that was asked of him.
'Liverpool's midfield is a strength, not a weakness'

Fabinho is not a playmaker in the same way his Brazil team-mate Philippe Coutinho made Liverpool tick before he joined Barcelona in January, but his presence helps the team create chances in a different way.
By pressing and winning the ball back so effectively, he does not have to make a killer pass to anybody - he can leave it to Mane, Mohamed Salah or Roberto Firmino to do that.
I get frustrated when I hear people saying Liverpool's midfield is not creative enough, or does not provide enough assists, because if they are winning the ball back and feeding key players in key areas, then they are doing exactly what they are supposed to.
Whoever is in there, they are stopping the opposition from reaching the Liverpool defence and also giving the Reds' strikers more opportunities because they are so high up the pitch when they get the ball back.
The midfield is an area of Klopp's team which seems to get criticised a lot for what people think it lacks, but it is actually vital to Liverpool's style of play.
As good as the front three are at pressing, whoever is in midfield has to be extremely well organised to push right up behind them together in order for the system to work.
It is so effective because they are fearless in the way they go up there. I think that is partly down to the faith they have in their defence, but also because that midfield is so well drilled - they know teams will rarely get past them.
'Liverpool always believe they will find a way through'

Klopp praises 'aggressive' & 'brave' Liverpool winPlaying United is always a tricky game because you know it is going to be tough to break them down, but I was impressed by the way Liverpool handled it on Sunday.
They had 36 shots to six by Jose Mourinho's side, and I never felt as if Klopp's team were ever under much pressure, even if they always had to respect the threat posed by United's danger men.
There was a period in the second half when they were struggling to find a way through - Dejan Lovren, Virgil van Dijk and Nathaniel Clyne all had shots from long range and Klopp was getting frustrated on the touchline.
But he was able to bring Xherdan Shaqiri off the bench and try something different with 20 minutes to go, and he ended up getting the goals that gave them the points.
Liverpool's mindset was just as important as that substitution, though. Their only focus was on scoring rather than stopping United, and listening to Mane's comments afterwards he never doubted they would make the breakthrough.
There seems to be a confidence with all of the Reds players that, if there is time on the clock, they will find a way.
Beating United put them back on the top of the table, and it will also be a massive confidence boost.

Even though Mourinho's side are only sixth, the rivalry between the two clubs made it a significant test.
How Liverpool fared in this fixture was always going to tell us a lot about whether they have what it takes to go the distance in the title race, and it is another hurdle negotiated for Klopp and his side.
The festive period, which includes hosting Arsenal on 29 December, is another hugely important period for them to get through.
If Liverpool can reach the end of December either top or close to City, before they play them at Etihad Stadium on 3 January, then they will be in an excellent position to maintain their challenge. Stephen Warnock was speaking to BBC Sport's Chris Bevan.Source: bbc.com