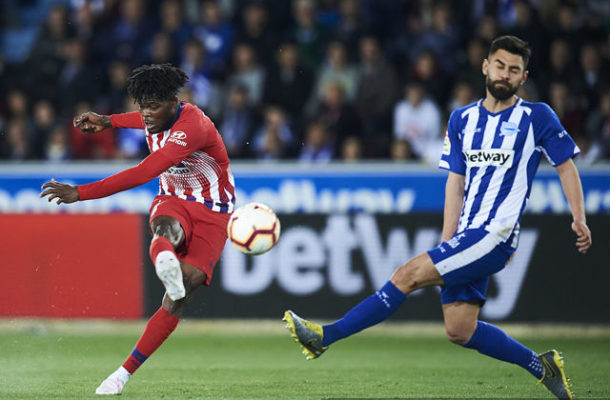 Ghana's Thomas Partey could be in a centre of transfer tussle as Liverpool joins race to sign the Atletico Madrid midfielder for next season.

Reports in Spain in Cadenaser suggest that Liverpool have made contact over signing Thomas Partey, who is already in the books of Arsenal and Manchester City.

The 26-year-old has expressed interest to stay with Atletico and is already in talks for contract extension.

But it is now thought that Jurgen Klopp would like to add the all-action midfielder to Liverpool’s squad next season.

Partey was in the Atletico side which recently beat Liverpool 1-0 in the Champions League and one of the trusted feet for Diego Simeone for the second league at Anfield in six days.

If the Reds do make a move for Partey, it will be an intriguing development as Manchester City have reportedly been chasing him hard before.

That transfer never materialised in the end, and Liverpool could reportedly now swoop.

If Partey was to join Liverpool he could either provide competition for Fabinho, or be used in one of the more box-to-box roles in Klopp’s side’s midfield.

Partey may not be the most creative of midfielders, but he would add strength and energy, and could be a solid replacement for either Jordan Henderson or Georginio Wijnaldum.

Liverpool have run away with the title this season, but there is a feeling that strengthening in midfield will be a priority for Klopp, and it seems that Partey is already on his wishlist.