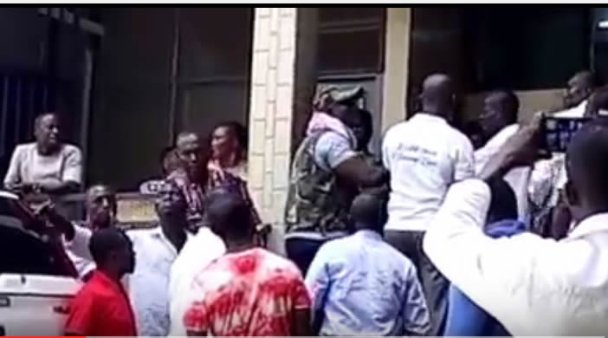 A Local Government expert says the bloody fight for a new presiding member in the Kumasi Metropolitan Assembly can only be attributed to partisan politics at play between the governing National Democratic Congress and the New Patriotic Party.

George Kyei Baffour hinted the situation may even escalate if the time comes for a new mayor to be elected. He has therefore called for power sharing between the two leading political parties for peace to prevail in the KMA.

The Kumasi Metropolitan Assembly is currently without a Mayor and a Presiding Member, the two most powerful political positions in the region.

The Mayor, Kojo Bonsu was ousted from office two months ago after protestation by the Asanteman Council who accused him of being disrespectful.

With the Mayor's seat vacant the Assembly is in a desperate need for a presiding member to oversee the activities of the Assembly.

However, after five attempts at electing a new presiding member, Tuesday, none has emerged victorious at least for now.

The elections have ended in a deadlock with reports of violence all through. Luv FM's Erastus Asare Donkor reported that blows were exchanged, chairs were thrown  and insults hurled by the assembly members in an atmosphere of chaos.

The two contestants in the bloody marathon elections, Nana Adum-hene and Nana Kofi Senya, have both been asked to step down for a peaceful election, something they did grudgingly paving way for new nominations to be made.

Out of the four new aspirants, one stepped leaving Michael Adusei Bonsu, Abraham Boadi, Poku Obeng, to contest the poll for a new presiding member.

After elections Boadi polled 65 with Bonsu and Obeng polling 59 and 2 votes respectively.

The elections have thus been rescheduled to Friday but before that election, members will decide which system to adopt for the elections. They are considering allowing the contestant with the highest number of votes to stand for a yes or no vote.

Speaking to Joy News George Kyei Baffuor said he was not surprised by the drama and chaos.

"The underpinning factor in the scheme of things is partisan politics. If they are not able to sit at table behind the scenes and deal with it and share power, the problem will continue," he said.

He would rather the Assembly settles for a government appointed and elected Mayor and an NPP elected presiding member in order for peace to prevail.

"The NDC elements do not want somebody well ingrained in the NPP to cause problem for their Chief Executive," he stated.

"If they are not careful and Chief Executive is nominated, it will even be more confrontational. I believe that is also going to be a major problem because they will still have to vote along the same lines and that could create another stalemate," he added.