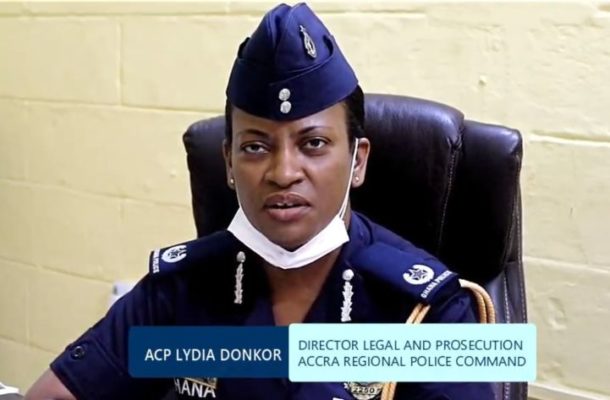 The Ghana Police Service has revealed that they have arrested a total of 406 people who have gone in contrary to the restriction act out of which 41 have been  arraigned before court and could face a 14-year jail term each if found culpable.

According to the Police, 41 persons out of the total of 406 persons arrested have been arraigned before court and will be dealt with if they fall foul of the law.

Out of the 406 people, a total of 103 are currently in custody across the country whiles 248 have been granted bail pending further investigation.

Making these figures known at the Press Briefing currently ongoing, the Director in-charge of Legal and Prosecution of the Ghana Police Service in Greater Accra said order has been given to Prosecutors across the country to ensure that the laws are applied to the latter in order to serve as a deterrent to others.

ACP Lydia Donkor warned persons caught flouting the directive to stay at home will either pay a penalty ranging between GHS12,000 to GHS 60,000, or serve a jail term from four to ten years.

Meanwhile, Deputy Information Minister Pius Hadzide  has challenged Ghanaians who doubt the potency of the law to violate them at their own peril.

“If you break the rules and you are arrested, you will be arranged before court and the least penalty you’ll be given is 1000 units which amounts to GH¢12, 000.

"So those of you giving flimsy excuses that you are going to visit your girlfriend, or visit your siblings be careful.