Mahama is the biggest threat to Ghana’s future - Nana Addo 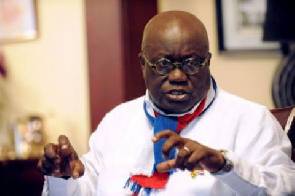 The 2016 presidential candidate of the New Patriotic Party (NPP), Nana Addo Dankwa Akufo-Addo, says the continued stay in office of President Mahama poses the biggest threat to the future of Ghanaians present, and the generations unborn.

According to Nana Akufo-Addo, President Mahama’s tenure in ‘high office’ over the last 8 years, first as Vice President for 4 years and President for another 4, has been characterized by the politics of deception and propaganda, massive levels of unemployment, despondency, rising cost of living, and severe hardships and suffering amongst the citizenry.

“We need a new kind of politics in Ghana. A politics based on principle, on policy and on direction for the Ghanaian people. That’s the politics we need, and not the politics of deception. We want a new direction for our nation. John Dramani Mahama is the biggest threat to the future of our nation, and we have to work hard between now and December to kick him out of office,” the NPP flagbearer said.

Nana Akufo-Addo was addressing a mammoth rally at Mallam junction, in the Weija/Gbawe constituency, at the campaign launch of the NPP’s parliamentary candidate for the constituency, Tina Mensah, on Sunday, October 2, 2016.

The NPP flagbearer’s comments were premised on recent comments made by President Mahama who, in the wake of Moody’s upgrade of Ghana’s credit ratings, stated that “everybody recognizes that Ghana is rising and Ghana is doing well.”

“I have said this before and I want to repeat it. Is President Mahama living in Ghana with us, or, perhaps, he lives in a different country? Has he given jobs to the thousands of jobless young men and women in the country? Has he revived the large numbers of companies which have collapsed under his tenure? Are parents now able to pay the high school fees of their wards? Has he resuscitated the collapsed National Health Insurance Scheme?” Akufo-Addo asked, which drew a resounding “NO” from the thousands gathered.

Touching on Moody’s rating, the NPP flagbearer wondered: “Did the Moody’s rating take into account the hundreds and hundreds of thousands of youth who have no jobs? Have they taken into account the massive and unprecedented levels of unemployment, for which President Mahama says Ghana is doing well? We beg of him (President Mahama). If he is coming to the end of his term of office, Ghanaians are urging him not to say things that will further anger them.”

Be wary of Mahama’s unprincipled politics

With 2 months to the December 7 polls, Nana Akufo-Addo urged Ghanaians to be wary and not to entertain the “unprincipled politics” of President Mahama which will be waged fiercely in the coming days.

The NPP flagbearer recounted how, over the last 4 years, the NPP had advocated for the restoration of the scrapped nursing and teacher trainee allowances, with the solemn pledge that when voted into office, an Akufo-Addo government will restore these allowances in full.

This statement by the NPP drew a sharp response by President Mahama who, at a forum held at the University of Cape Coast, on September 7, 2016, stated that “for partisan politics purposes, you have your political opponent come and say ‘when we come back we will restore trainee allowances’. For me, it is better to lose the election on principle than win it on falsehood. We will not reverse the decision.”

However, according to Nana Akufo-Addo, on Saturday, October 1, 2016, “he (President Mahama) was in the Volta Region and told the people that he has given an order, two months to the holding of the elections, that, with immediate effect, nursing trainee allowances must be paid. Is this how a country is governed? With 2 months to the holding of the elections, he now sees the wisdom is restoring these allowances.”

Again, Nana Akufo-Addo recounted how, during his recent tour of the Central Region, he visited Moree, where the fisherfolk “told me of the immense hardships they were encountering, coupled with the unbearable costs of inputs for fishing. All the programmes implemented by President Kufuor, according to them, had collapsed, and were convinced that under an Akufo-Addo-led NPP government, the sector will thrive again.”

The NPP flagbearer continued, “Within 24 hours of my departure from the Central Region, outboard motors and premix fuel were sent to Moree and distributed free-of-charge to the fisherfolk. It is clear that everywhere I go and I assure residents of an improvement in their living conditions, the next day, government sends goodies to those areas in order to sway them. The Ghanaian voter is discerning.”

To the thousands gathered, Nana Akufo-Addo urged them not to be swayed by ‘goodies’ being brought to them by the NDC, but to remain steadfast and vote for the NPP’s parliamentary candidate, Tina Mensah.