Mahama has not congratulated Ofori Atta for fixing economy – Aide 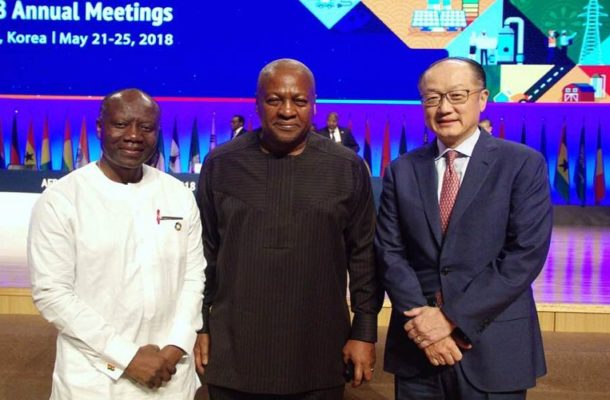 The office of former President John Mahama has slammed what it says are attempts by government functionaries to twist the import of a photograph of ex the President and Finance Minister, Ken Ofori Atta.

The former President is seen sandwiched by Ken Ofori Atta and President Jim Kim in a photograph taken at the ongoing AfDB annual meeting in Korea. But Aide to Ex President Mahama, Joyce Bawa Mogtari in a statement of Facebook took strong exception to the claims made by the likes of Gabby Asare Otchere Darko stating that “it is a pity that some persons close to government have resorted to social media to twist the import of the said photograph for cheap political purposes.”

“It is recognized in all international financial circles, that Ghana is currently riding the crest of the wave generated by the strong fiscal reforms undertaken by the Mahama administration. Indeed, it is acknowledged that the strong growth Ghana is experiencing, for which we are being awarded is based on the hard work that administration put into bringing the Sankofa and the TEN oil and gas fields into operation in record time. Mr Mahama laid the foundation for the success in the Ghanaian economy today.

“Indeed the offending comments accompanying the photograph are an example of the pettiness that has become the bane of Ghana’s politics and development and I refuse to believe that Mr. Ken Ofori Atta is associated with this, because he earned respect when despite political differences, he paid a courtesy call on President Mahama in his hotel in Busan.” the statement added.