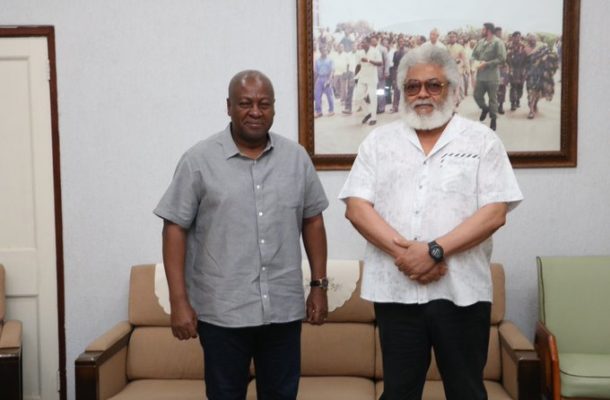 The two former presidents said they had warm discussion

Flag bearer of the National Democratic Congress  President John Dramani Mahama has met with the party's founder Jerry John Rawlings to have discussions ahead of the 2020 general elections.

Saturday's meeting comes after the party announced its campaign team and the completion of its manifesto for the december contest as the NDC seeks to wrestle power from the ruling New Patriotic Party.

Details of the meeting were not stated, but the two former presidents have both confirmed  having "warm discussions"  with Mr Rawlings adding that their discussion bothered on "party matters".

They both took to their social media pages to announce the fruitfulness of the meeting,  which comes as a mark of unity between the two Johns.

" "I called on @officeofJJR, this morning in his office, to discuss a number of NDC-related issues. Very warm discussions as always," Mahama said.

Flagbearer former President @JDMahama called on me at my office on Saturday morning during which we held warm discussions on party matters. pic.twitter.com/KVlczrZ2sM
— Jerry John Rawlings (@officeofJJR) July 4, 2020

With the campaign team set and Manifesto completed, John Mahama is now expected to announce its running mate to begin the mission of winning the 2020 election, four years after losing to Nana Akufo Addo.