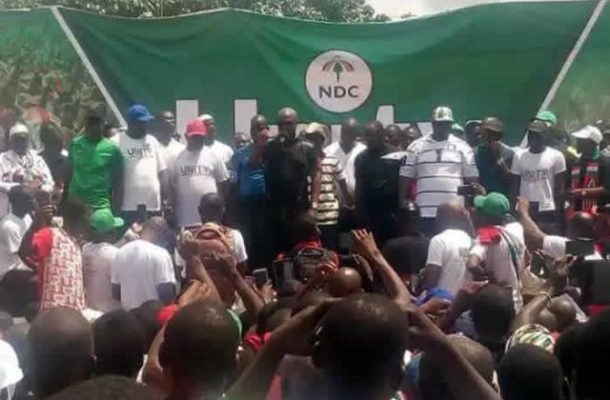 Former President John Mahama has mocked the New Patriotic Party (NPP), saying it has let Ghanaians down by its unfulfilled election promises.

The Nana Akufo-Addo-led administration, he said, had failed to deliver on its election campaign promise of creating jobs, stabilizing the economy and implementing social intervention programmes to lift Ghanaians out of poverty.

“What has become of the many factories and jobs they promised to give Ghanaians? What of bringing inflation down and also providing each constituency with $I million? Maybe, they are only buying time to deceive us again”, the former President added.

Addressing a rally of the National Democratic Congress (NDC) after a unity walk at Asawasi in the Asokore-Mampong Municipality, he told the gathering that the NPP government could not continue to deceive the people.

Earlier, the party supporters had embarked on a three-hour procession through some principal streets of the municipality.

This formed part of efforts to promote unity and peace, following the party’s humiliating defeat in the 2016 general election.

Kofi Portuphy, the National Chairman, Johnson Asiedu-Nketia, the General-Secretary, Julius Debrah, former Chief of Staff, and some former Ministers of State and Members of Parliament (MPs) were on hand to participate in the walk.

The leaders took turns to address the supporters on the state of the economy and developments in the NDC.

The former President appealed to the rank and file to bury their differences and work together to return the party to power.

Mr Asiedu-Nketia said they had taken steps to strengthen the party’s internal structures in order to wrest power from the NPP in 2020.