Mahama, other politicians who used their favourite song lyrics to make a point 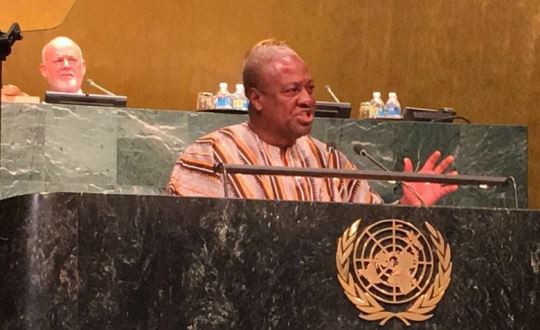 When Ghana's President John Mahama began speaking at the United Nations General Assembly on Thursday, few would have predicted the King of Pop making an appearance.

However, Mr Mahama felt Michael Jackson's lyrics - taken from 1991 hit Heal the World - were the perfect words to open a speech which touched on a disease, the economy and increasing international tensions.

"Michael Jackson sang, 'heal the world make the world a better place for you and for me... and the entire human race'," Mr Mahama told assembled world leaders in New York.

"What happened to that enthusiasm?" he wondered.

While unusual, it transpires that Mr Mahama - who proudly told delegates he was born the same year as "one of the greatest artistes that ever lived" - is not the only politician to be inspired by the words of a musician.

Here are five others who used their favourite recording artists in order to make their points:

Among the things former UK Conservative Prime Minister David Cameron will be remembered for is his penchant for The Smiths, which he reminded us of during one of his final appearances in parliament. It is not the first time his love of the band has made an appearance in parliament.

Back in 2010, he and Labour MP Kerry McCarthy traded song names across the floor,

The Smiths, however, have let the world know they are not a fan of his.

"I do forbid him to like it. He shouldn't like us because we're not his kind of people," guitarist Johnny Marr told the Today programme in 2013, echoing similar statements made by lead singer Morrissey. "She fixed the day and the date, and she told us what happened. As far as I remember it went like this: 'There was I, waiting at the church.' Perhaps you recall how it went on.

"'All at once he sent me round a note. Here's the very note. This is what he wrote: Can't get away to marry you today, my wife won't let me.' Now let me just make clear that I have promised nobody that I shall be at the altar in October. Nobody at all."

Unfortunately for Callaghan, the song was not only not performed by Marie Lloyd, but he lost the election to Margaret Thatcher in 1979. US Republican presidential candidate Donald Trump is fond of quoting The Snake - a 60s soul song by the late civil rights activist Oscar Brown Jr - when making a point about welcoming refugees to America.

The song tells the story of a woman caring for a serpent after taking pity on him, and ends with her getting bitten by his poisonous fangs.

The final two lines - the snake's response to the doomed woman's last question of "why" - go: "Oh shut up silly woman, said the reptile with a grin.

"You knew damn well I was a snake before you let me in."

The song's use has been met with horror - both by people on social media, disgusted with the comparison of refugees to snakes, and by Oscar Brown's family.

The singer's daughter Maggie Brown told the Chicago Tribune : "If dad were alive, he would've ripped (Trump) with a great poem in rebuttal. Not only a poem and a song, but an essay and everything else." In Australia, Labor senator Sam Dastyari quoted American superstar Taylor Swift in parliament as he made a point about the state of his opponents.

He read out the lyrics to Swift's song Blank Space, saying it "really is a modern soliloquy on the Liberal party".

"Saw you there and I thought oh my God, look at that face. You look like my next mistake," he began.

"New money, suit and tie. I can read you like a magazine. Ain't it funny, rumours fly. And I know you heard about me," he deadpanned.

"So it's gonna be forever, or it's gonna go down in flames. You can never tell me when it's over, if the high was worth the pain." Outgoing US President Barack Obama did not even need to say the actual lyric in one of his speeches ahead of his 2008 election - the Democrat managed to encapsulate an entire Jay-Z song in just one movement.

"When you are running for the presidency, then you got to expect [criticism], and you just kind of got to let it...' Obama told an adoring crowd, letting the sentence hang in the air before brushing dirt off his shoulder - a nod to Jay-Z's hit Dirt Off Your Shoulders.

But unlike Trump and Cameron, the use was welcomed by the hip hop star.

"He's tuned into the culture which is fantastic," Jay-Z told BBC Newsbeat at the time. "I feel like Frank Sinatra back in the day when Frank Sinatra was mingling with the Kennedys."