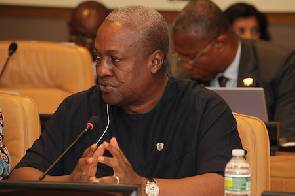 The President, John Dramani Mahama, has virtually questioned the whereabouts of the Highly Indebted Poor Countries (HIPC) fund, which came to the Kufuor-led government, as a result of debt cancellation three months into his first term in office.

Many have demanded to know the quantum of the HIPC fund which came to the government chest and also questioned what the New Patriotic Party (NPP) government, used the funds for, apart from few classroom blocks, which were painted in HIPC colours and KVIP toilets built in some remote places across the country for people to defecate.

“If you look at the facts, it is absolutely untrue that we are incurring debt because post HIPC, Ghana had a debt write off. But if you look at the period from 2006 until 2008, under the NPP government, they virtually doubled the debt again after it had been written off. We will release what the debt figures were from independence till now; we will show the structure to Ghanaians. Our debt profile is currently $24 billion and in total, that is dollar and cedi debt, GHC104 billion”, President stated during an interview with Ovation Magazine.

President Mahama, appears to have joined those seeking some explanation on the funds, while dismissing suggestions by the opposition NPP that the governing NDC, has incurred huge debts for the country, but nothing to show by way of development.
Yaw Osafo-Maafo, a retired Ghanaian banker, engineer turned politician, was the Finance Minister in the Kufuor government, who took Ghana to HIPC.

He boasted about the benefits of the initiative, while disbursing the cash. But years on, it appears the initiative was a mere national mirage; there are no tangibles to show.

President John Agyekum Kufuor in March 2001, explained his government’s decision to opt for the HIPC initiative, saying it was not political, but based on an objective analysis of the economic situation.

“We did not take the decision to join HIPC as a political trick or gimmick, but as an opportunity to take a breather to pursue medium to long term targets,” the President said, when heads of United Nation (UN) agencies in Ghana called on him at the State House to express support to the new administration and also outline their programmes for the year. The delegation was led by the then UN Resident Co-ordinator, the late Alfred Sallia Fawundu.

According to President Mahama, Ghana’s debt profile, has rather gradually reduced under the NDC administration.

“If you look at the facts, it is absolutely untrue that we are incurring debt because post HIPC, Ghana had a debt write off. But if you look at the period from 2006 until 2008, under the NPP government, they virtually doubled the debt again after it had been written off. We will release what the debt figures were from independence till now, we will show the structure to Ghanaians. Our debt profile is currently $24 billion and in total, that is dollar and cedi debt, GHC104 billion.

“But if you look carefully at the graph, our debt profile is declining and that is because we have now put in place a public debt management strategy. Before, any state-owned enterprise that borrowed money, it was added unto the public debt, but what we have done now is to create a Public Debt Management Strategy that says that state-owned enterprises must borrow off their own balance sheets,” he argued.

Asked about his government’s measures to address various economic challenges, President Mahama said: “We have heard the complaints and it is the very reason that we are doing all that we are doing so that the people will live a better life. Honestly, if you do not build the infrastructure, unemployment will get worse because you need to build certain foundation upon which the economy can grow and create the jobs that you want”

“All the things we are doing is what will grow the economy. If an investor comes into this country and he cannot get a school to send his children to, no roads to move their goods, no good hospitals for their staff and so on, he may just go elsewhere. You need the social infrastructure to act as a kind of stimulus that would create jobs and put money in people’s pockets,” he added.

He expressed worry over what he calls the control of Ghana’s media by a cabal who are blocking his message of transformation.
According to him, a certain group of people have taken control of the Ghanaian media and are blocking his government’s message, a situation which in his view, makes it difficult for people to know the truth.

“It is populism, a certain group has taken control of the media in Ghana and it makes it difficult for people to discern the truth. So as much as you are putting out the information, it is either being blocked or distorted,” he said.

The President, also denied suggestions that he had failed to crack the whip on Ministers, who have not conducted themselves well over the past years.

He believes he has been assertive, as far as issues relating to corruption is concerned.

“We have 300 FM stations in this country, we have seventy newspapers or so, we have all kinds of media. All kinds of media raise allegations against office holders.I cannot on the basis of every allegation that is raised take action. It means I will change my cabinet so many times if I acted on every single allegation.

“For every allegation that is made, I have said I will consider the accusation seriously, we will investigate and if those allegations are substantial that requires that I take action against a Minister, I will do so. And I have done that in several cases, I have changed Ministers,” he argued.

Then President Kufuor at a meeting with the UN agencies, said opting for HIPC, was not in itself an end to the economic difficulties facing the nation. He described as unfortunate, certain comments by a section of the public whom, he believes, do not understand the issues.

“Unfortunately people are not understanding the issue. They talk as if HIPC is in itself an end (to the problems). HIPC cannot be an end, we’ll need to work more to attain the desired goals.”

There have been mixed reactions to the government’s decision to opt for the HIPC initiative, which seeks to provide debt relief to cash-strapped countries based on the implementation of poverty alleviation strategies prescribed by the IMF and the World Bank.

While, some hailed the decision with the belief that it would ease the heavy debt burden on the country, critics maintained that declaring oneself poor, could pose credibility and image problems, especially for the private sector.

President Kufuor, said there was no pride in declaring oneself poor. “Man must be practical, so we took HIPC as a reality and must work to turn the situation round.”

He urged the UN agencies to have confidence in the government and remain its partners to bring development to the nation.

President Kufuor, restated his vision to usher Ghana into a golden age of business, which he said, would be pursued through good governance, the rule of law and support for the private sector.

“We’ll show to the world that we mean business, to set the pace for the sub-region.”

He lauded the UN for its efforts at uplifting humanity on the globe and said his government would continue to co-operate with it and related agencies towards the creation of wealth for the people.