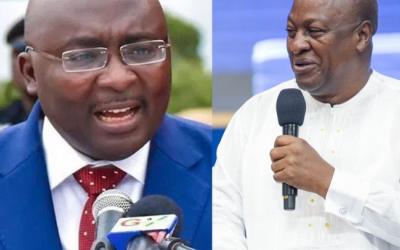 I am going to tell you something perhaps you’ve never heard before and that is because some people deliberately decided to change the economic narrative of this Country.

But truth they say stands and today the truth is about to come out…!!!

Did you know that the previous NPP Government left power in 2008 with a totally crushed Economy?

Yes you heard right, the then NPP Government left Ghana’s Economy in a complete abyss with almost everything crushed to the ground before they exited power.

Folks I am going to show you a letter, the World Bank Country Director of Ghana in 2009, wrote to President-elect John Evans Attah Mills.

This letter is dated 3rd January, 2009, When President-elect J.E.A Mills had not even been sworn in as President, the World bank decided to write to him to notify him of the severity of the mess his Government would be inheriting so he would be prepared for it.

Relax, I am going to share with you this letter which till date only Prof.Mills and few people around him at the time may have seen because Prof.Mills decided not to make this letter public.

The first paragraphs of the letter reads and I quote…

“As a close and trusted partner of Ghana, I feel that it is the World Bank’s responsibility to alert you even before you are sworn in of the difficult financial situation Ghana finds itself, and to offer the World Bank full support to you and your new Government in dealing with these difficulties”

“As you are well aware, the macroeconomic situation that your Government is inheriting is unfortunately extremely worrisome.

Both the fiscal deficit and the balance of payments deficit are high and at unsustainable levels.

Given the current state of the International financial markets, we do not believe that these deficits can be financed in 2009 as they were in 2008.”

Folks this the first few paragraphs of the letter dated 3rd January, 2009 signed by Mr. Ishac Diwan, World Bank Country Director for Ghana at the time warning the new President J.E.A Mills of how hopeless the situation was for Ghana.

The letter further goes on to give a full verdict of Ghana’s Economy in details and how gloomy things were and was going to be for the Country because of the havoc the NPP had wrecked on the economy.

Ladies and Gentlemen, your’s truly Dr. Bawumiah was then the Deputy Governor of the Central Bank and part of the team that created this economic mess and again was brought in as a Running Mate to Nana Akufo Addo in the 2008 elections.

Folks, this is the track record of Dr. Bawumiah that earned him the Running Mate slot for the NPP in 2008(can you imagine)

Ladies and Gentlemen, I am telling you this so you can appreciate and understand that the assertion that NPP are better managers of the Economy is nothing but a “fallacious” myth which would be demystified today after reading this article.

And trust me, even the IMF and the World bank are fully aware that the NPP are worst managers of the Ghanaian Economy and that is exactly what the World Bank’s Country Director meant in his letter to Prof. Mills.

Now let’s move on, take your time and follow the conversation, so you don’t miss anything…

By the time the NPP exited power in 2009, Ghana’s real GDP stood at 9.1%, the overall macroeconomic situation had seriously deteriorated on the account of huge fiscal and current deficits.

The destruction was so monumental that fiscal deficit stood at 14.5% of GDP whiles arrears alone amounted to 22% of GDP and the Public debt stood 36% of GDP even after huge debt forgiveness from HIPC.

Fact is the NPP Government left a totally crushed economy with almost nothing in the coffers plus a single spine pay policy risk to the almost dead Economy.

But at the same time Dr.Bawumiah was on campaign platforms bastardising the NDC as worst managers of the economy when his track record at the bank of Ghana was by making the Ghanaian Cedi one of the worst performing currencies in World.

Folks, this is the legacy of your’s truly Dr. Mahmoud Bawumiah at the Bank of Ghana and also as part of the team that managed the Ghanaian Economy between 2001-2009.

Folks I am going to show another document, I told you today is revelation day and we shall demystify all the myths that had surrounded our body Politics for so long.

This is a report by the Standard Bank Group Limited in the UK in somewhere November 2009, less than a year after President Mills assumed office.

The Standard Group carried out its independent assessment of the Ghanaian Economy and 24 other emerging markets.

And within one year Ghana’s Economy which had been written off by the World Bank, has been turned around with the Ghana currency being the best performing currency among the 24 emerging markets the Standard Group carried this survey on.

For the avoidance of doubt, the emerging markets included, Philippines, Malaysia, South Africa, Nigeria, Turkey, Russia, Mexico, Poland, Hungary,Brazil Chile, Israel,Botswana and others and yes the Ghana Economy was on top of the list as the number one best performing emerging markets as far as our currency was concerned.

And guess who was the Head of the Economic Management Team that achieved this feat within a year, John Dramani Mahama.

Folks, in less than a year, John Mahama (without a PhD in Economics) steered the almost wrecked ship of Ghana’s economy to safety and by mid 2010 and 2011, the economy had taken off recording double digits growth rates for the first time in the fourth Republic.

Ladies and Gentlemen, this is the track record of John Dramani Mahama.

But you see I cannot end this article by pointing out the huge destructions which the World Bank admitted was being done to the Ghanaian Economy during previous NPP Government.

The most significant thing that I want you to note is that in the World Bank’s own words, NOBODY KNEW THE LEVEL OF DESTRUCTIONS GOING ON AT THE TIME UNTIL THE NPP LOST THE ELECTIONS

I am going to highlight that aspect of the World Bank’s letter so you can appreciate the seriousness of the problem.

And the Problem is that just like this current Government, the previous NPP Government was also cooking figures for the International Monetary Agencies just to cover up the mess they had created with the economy.

Suffice to say that it is these same cooked figures that Dr.Bawumiah keep quoting to support his frivolous argument that the NPP are better managers of the economy.(how convenient)

But most importantly, I am bringing this to your attention because history is repeating itself right (it always does) and this time the level of destruction currently being done to the Ghanaian Economy at our blind side is extremely legendary!

Can we ask Dr.Bawumiah how much the Cedi is now to a dollar?

Even In the midst of COVID-19 with reduced imports and almost zero profit repatriation by Multinational corporations, the Ghanaian currency is at its worst moments ever.

(How incompetent can one be)

I also bring you good news and hope as well…

There is one man who has done this before, turned the Ghanaian Economy around in 2009 in less than a year after it was runned down by the Dr.Bawumiah and the NPP Government.

This man is coming again as President and you can imagine how quick and efficient he will turn this already destructed Economy around this time.

Folks, Hope is here is again!!