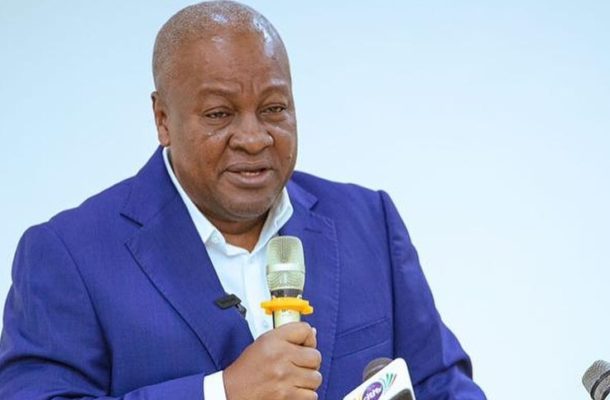 He particularly blamed the Akufo-Addo government for doing too little to salvage the ailing economy and bring reprieve to suffering Ghanaians.

His comments come on the heels of Standard & Poor’s (S&P) recent downgrade of Ghana’s foreign and local credit ratings from B-B’ to CCC+C with a negative economic outlook.

According to S&P, the downgrade was due to intensifying financing and external pressures on the economy.


In a statement, John Mahama said, “there appears to be no end to the problems with the Ghanaian economy, with the recent downgrade to CCC+/C junk status”.

Mr. Mahama said the only remedy is for a consultative discussion among relevant stakeholders to reverse what has become a worrying trend.

“A national dialogue on the economy, bringing some of our best brains together, will serve us well, even as we prepare for debt restructuring and negotiation of an IMF programme.”

He said the unstable currency and the recent mid-year budget review, do not repose any confidence in the economy.

“The steep depreciation of the Ghana Cedi in recent days, clearly shows that the mid-year review of the 2022 budget failed to win back the confidence of the investor community and the Ghanaian public.”

“Unfortunately, no credible remedial plans have been put forward by the government to salvage the [ailing] economy”, John Mahama wrote on Facebook.

Before S&P’s downgrade, Fitch had already downgraded Ghana’s Long-Term Foreign-Currency Issuer Default Rating (IDR) to ‘B-‘ from ‘B’ and handed it a negative outlook.

Moody’s Investors Service (Moody’s) also downgraded Ghana’s long-term issuer and senior unsecured debt ratings to Caa1 from B3 and changed the outlook to stable from negative.

The Finance Ministry has, already, expressed disappointment at the credit rating agency’s decision.

It says despite the impact of global external shocks on the economy, government has taken some proactive measures to revive the economy.

It said some key revenue and expenditure measures, including the 30% cut in discretionary expenditures, have been implemented.


But President Nana Addo Dankwa Akufo-Addo is confident Ghana’s economy will bounce back, despite recent challenges.

Nana Akufo-Addo said, although he admits times are difficult, the economic situation of the country will turn around shortly.

“Yes, the difficulties are there, and I want to minimize the difficulties that are affecting the lives of ordinary people in a very negative way. What I am saying to the people of Ghana is that, they should continue to have confidence,” the President said.