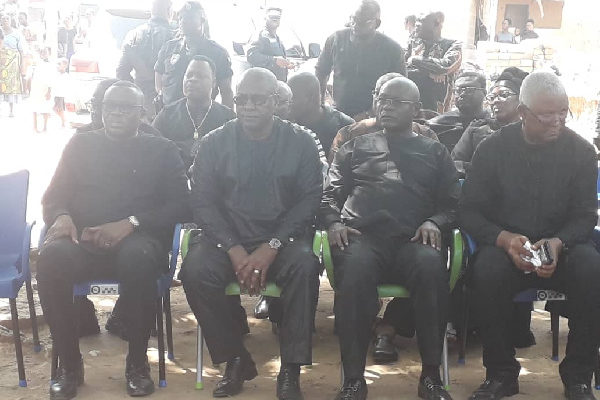 Former President John Dramani Mahama, flag-bearer of the opposition National Democratic Congress (NDC) has on Saturday, March 7, 2020, paid a visit to the family of the assemblyman, Mawutor Adzahli who was gruesomely murdered in his house at Sogakope.

Ofosu Ampofo, national chairman of NDC, Member of Parliament for South Tongu constituency, Hon. Wisdom Mensah Woyome and few party executives were all in attendance to mourn with the Adzahli family as well as express their condolences.

Mahama's visit to Sogakope came just a day after former president Jerry John Rawlings was in the town to observe the 63rd Independence anniversary as a way of mourning with the chiefs and people of the town on the loss of their beloved son.

A cash amount of GHS 2,000 has also been donated to the family by John Mahama.

According to a source close to the bereaved family, the money is to be used to buy items such as potable water to receive visitors, mourners and sympathizers who will be visiting the family.

Marcus Mawutor Adzahli was shot dead in his room on Sunday, March 1, 2020, at around 1:00 midnight by unknown assailants after they managed to break down his well-fortified door with cement blocks.

The assailants said to be about eight (8), reportedly stormed the home of Adzahli wielding guns amidst sporadic shooting.

The body of the deceased has since been deposited at the Sogakope District Hospital Morgue.

Adzahli aka Mac-Greenline was elected assemblyman in the December 17, 2019, local assembly elections.

He is known in Sogakope for his mobile money business, with many outlets across the Sogakope Township.