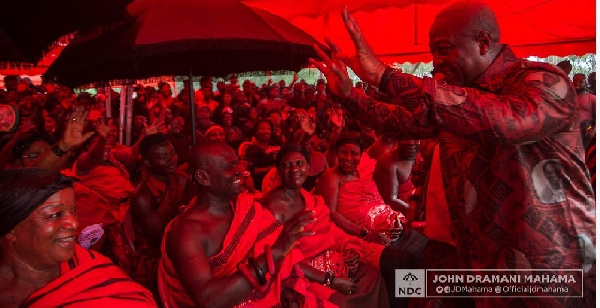 Ex-President Mahama at the funeral

Former President John Dramani Mahama and his wife, Mrs Lordina Mahama stormed the Bono Regional Capital, Sunyani on Frida, February 28, 2020, to mourn with the Sunyanimanhene, the people of Sunyani and children of the late Sunyani Omanhemaa, Nana Yaa Nyamaa II.

Mr Mahama described Nana Nyamaa II, who reigned for almost 47 years, as “a friend to many, a development-focused traditional leader who championed the education of her people and was committed to keeping Sunyani clean.”

Mr Mahama’s wife, Lordina Mahama, a personal friend of the late Omanhemaa, in her tribute, said: “Nanahemaa was not only a queen mother. To me, she was a sister, an elder sister and mother with whom I discussed many issues, especially relating to tradition”.

Mr Mahama said the late queen mother’s strength as a person “was expressed through the remarkable quality of her relationship with other people, her ability to make all who she met count, no matter how brief the meeting. She always considered others as special.”

When it came to leadership, the late queen mother, according to Mr Mahama, was “courageous, something she endured to the end.”