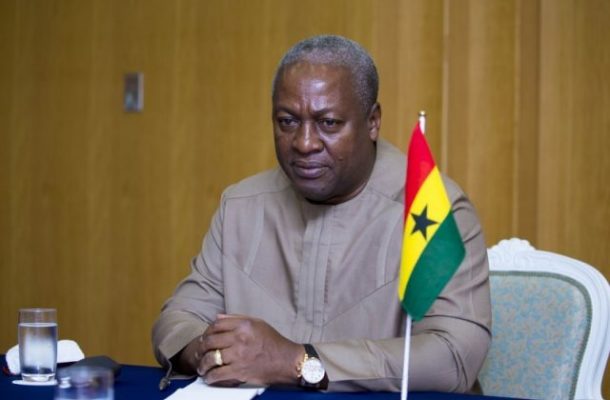 With everything appeared set on the side of the New Patriotic Party (NPP) on the 2020 Presidential and Parliamentary elections, the nation is waiting with bated breath on the Presidential candidate of the opposition National Democratic Congress (NDC) to name his running mate for the December 7, polls.

The Herald's several attempts to get the person to partner the NDC's John Dramani Mahama in the battle against Nana Akufo-Addo and Vice President, Dr Mahamudu Bawumia for some days, continue to draw the response "JM is keeping everything close to his chest" and "the man is tight-lipped".

The ex-President's aides, who would ordinarily talk to The Herald, continue to insist they are not aware of the boss' choice for a running mate, but they were sure that he was going to make a good choice to enhance the NDC 2020 ticket.

But the names of many party members continue to make the rounds with reports that one of them could be named soon, after Mr Mahama's final meeting with the National Executive Committee (NEC).

This will be after meetings with NDC's founder, Jerry John Rawlings and the current Chairman of the Council of Elders of NDC, Alhaji Iddrisu Mahama.

The last meeting between him and the NEC at the party's headquarters was to decide on the membership of the National Campaign Team led by Joshua Alabi.

Also, on the list, The Herald learnt, is Dr Kwabena Duffuor, a former Finance Minister, banker and businessman, who once served as Governor of the Bank of Ghana (BOG).

The Herald picked up information that although ex-President Mahama wanted Prof. Kwesi Botchway as running mate based on his knowledge and experience of managing the Ghanaian economy during the turbulent times of the Provisional National Defence Council (PNDC), the Military junta led by Flt. Lt. JJ Rawlings, the man who once served as Chairman of the National Development Planning (NDPC) complained of old age, failing health, as well as family protest. But for these, Prof. Botchway would have been named long ago.

His only challenge was that he was coming from the Central Region and because the NDC had had John Evans Atta Mills and Paa Kwesi Amissah Arthur from the region, some party bigwigs, feel that the Central Region has been offered a lot of opportunities to serve the country.

Dr Kwabena Duffuor, a former Finance Minister, is mentioned as the candidate of ex-President Jerry John Rawlings. He has gathered experience as an economist, a former lecturer, a banker, a businessman; owner of the Unibank, Unicredit, Star Insurance, Prime Insurance, Starr FM among others.

His Ashanti lineage, to many, is to serve as a big plus as the NDC is seen to be dominated by Northerners, Ewes, Fantes, Nzemas among others, but the Ashantis are believed to be in the party but have always played back-burner roles. But like Prof. Botchway, Dr.Duffour is also facing the age issues. He is over 70-years.

Jane Naana Opoku Agyemang appears to be in a pole position among all with her gender, record as the first female Vice-Chancellor of a University- the University of Cape Coast (UCC). A former trained journalist, who also served as an Education Minister, where she excelled and made a name for herself.

Alex Mould, who is also on the list has over 30 years of international energy and banking experience, and widely regarded as one of Africa's leading authorities on energy, economic and leadership issues.

The ex-boss of the national oil company for Ghana was charged by President Mahama to develop GNPC into an independent and world-class operator through the execution of an accelerated growth strategy.

He began his career with GNPC where his core responsibilities included refining, crude and petroleum products supply and risk management.

Prior to joining GNPC, he was responsible for regulating the downstream sector as CEO.

He is said to be passionate about local content and public-private partnerships that demonstrate how the energy sector can generate investment and drive economic empowerment and transformation.

Social media publication WhatApp news, reports how Mr Mahama's choice had come after a long string of consultations within the opposition party which was truncated by the outbreak of the terrifying coronavirus in the country.

The NDC running mate selection has been a subject of intense concern for political pundits who have warned that picking a running mate too close to a major presidential election could be a fatal gamble for John Mahama.

Even Mr Mahama's arch-rivals in the governing NPP and the incumbent flagbearer of the party, Akufo-Addo, had taken pot-shots at the NDC candidate for the seeming delay.

Beaming excitedly while picking his own running mate on Saturday, June 27, 2020, Akufo-Addo referred to the NDC's running mate blues, saying, "...we have no such difficulty. We have the most fitting person to feature on our ticket."

However, Mr Mahama had earlier conceded that the outbreak of Covid-19 in Ghana mid-March 2020, had complicated matters on when would be considered appropriate to name his running mate, amidst radical public reforms being undertaken due to the coronavirus.

"In the midst of COVID-19, what is the use of naming a running mate you can't even outdoor him. The president is encouraging all of us to stay at home, that's not the most opportune time to come out and name your running mate and so we are on track," the NDC flagbearer responded to a query put to him during a public event in May 2020.

Between the two shortlisted persons, Whatsup News gathered that Mr Awuah Darko is the favourite of Mr Mahama, but insiders say the powerful Ahwoi family, are relentless in their lobby for Kwasi Awoi to emerge the final running-mate.

The Ahwoi brothers are a powerful power bloc within the NDC and have reportedly groomed Kwasi Ahwoi for the top Job. The bloc is also nicknamed "Church Street" bloc.

Mr Ahwoi may be judged based on his last appointment as Ghana's interior Minister in comparison to Awuah-Darko's milestone appointment as the unprecedented CEO of two major oil parastatal of Ghana-BOST and TOR.

During his time, Awuah Darko was credited for virtually bringing the comatose TOR back to life and turn it around from a resource-guzzling entity to a profit-making one.

As CEO of TOR, Mr Awuah-Darko managed the restructuring of the entire refinery operations, slashing TOR's perennial debt of $650 million to some $350 million.

Awuah-Darko, who hails from the Ashanti Region, has extensive experience in the finance and insurance spanning across Africa, Europe and the Americas, and he would be matching the NPP's Bawumia on this front.

On the other hand, Mr Ahwoi's forte is in planning and resource management, having held several positions in that regard. With his extensive professional and political career, he is surely a formidable choice.

On Wednesday, Mr Mahama, announced receipt of a copy of the party's 2020 manifesto further confirming his readiness for the election.

Receiving the manifesto, Mr Mahama wrote on Facebook, "this document, The People's Manifesto will represent the NDC and my social contract with the good people of Ghana’.

The Republic Day announcement came eight months after the NDC opened its doors to the public, calling for manifesto suggestions.

Expressing gratitude to the public for their contributions, Mahama wrote: "I thank you all for your contributions to the compilation, and as I have promised.

I look forward to the Policy Dialogue Series through which I will be sharing details of the various sectors and themes of the manifesto."