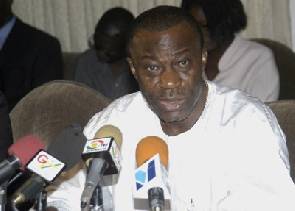 The Minority Spokesperson on Finance, Dr. Athony Akoto Osei, has described as petty, President Mahama’s request for the disclosure of the cost of the cedi redenomination exercise undertaken in 2007 by the then NPP administration.

Speaking at a rally in the Ablekuma North Constituency on Tuesday, President Mahama asked Dr. Bawumia to reveal the cost of the exercise, saying since the latter was a Deputy Governor of the Bank of Ghana at the time of the exercise, he should be able to tell Ghanaians how much it cost government to undertake the exercise.

“Do we remember the cedi redenomination under President Kufuor. During that time, someone [Bawumia] was the Deputy Bank of Ghana and uptill now, even me as a President do not know the cost of the redenomination exercise.

“Uptill today, no Ghanaian knows the cost of the redenomination exercise and the same people come and say someone is incompetent. When you redenominated the cedi how much did it cost us? Simple things like these you cannot tell us and you have the nerve to come and talk about corruption. Look in the mirror and look at yourselves,”he said.

But Mr. Akoto Osei in a sharp rebuttal dismissed the claims by the President, saying there is enough documentation by the Central Bank on the redenomination exercise.

“…So if a President says he as a President doesn’t know, then it is either the people are not educating him well…He has appointed a Governor.All that he needs to do is to call the Governor and ask for that information.

I am surprised the President will even make such a statement. He is the President of the country and he has appointed a certain governor, so why is he asking Dr. Bawumia? This information has been in the public domain for years. His advisers are not educating him well or he is being petty. ..The records are in the Bank of Ghana.”

Running mate of the opposition New Patriotic Party (NPP), Dr. Mahamadu Bawumia, has also responded to President Mahama’s claims , describing it as a “demonstration of incompetence.”

In a Facebook post, he also added a link to a Daily Graphic report from 2007, that put the cost of the redenomination exercise at GHc 66.2 million.