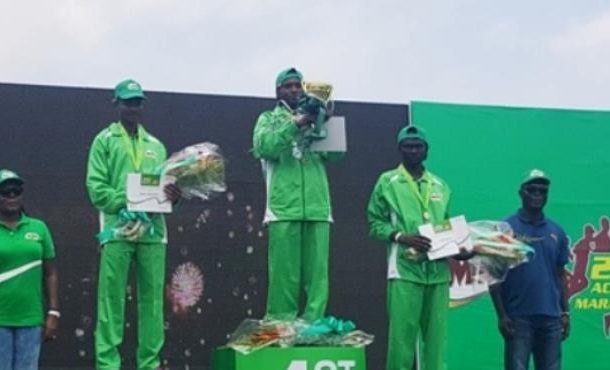 Malik Yakubu put a up a great performance to beat defending champion Kassim Mohammed and win the 29th Accra Milo Marathon on Wednesday.

The 42.2 km race started from the Nungua Barrier and it ended at the Dansoman Keep Fit Club, home of the organisers of the event. Yakubu and Mohammed rekindled their rivalry from last year's event when Mohammed won and Yakubu came third.

The time was two minutes slower than what was recorded last year. The dethronement of defending champions continued in the women's race when Elizabeth Azure of the Upper East Region edged Lariba Zakat to win the top prize.

Many observers tipped Zakat to defend her crown but it was not to be Azure went past her during a break due to some discomfort. Elizabeth Bortsor closed out the winner's circle with a third placed finish. The three ladies were given the same prizes as the male winners.

Fun run continues The 5km fun run was reprised in the 29th Accra Milo Marathon and it was done to encourage amateurs and members of the general public to complete the race and help promote Nestle's message of healthy among the society. In addition, for every one who crossed the finish line in the fun run, a pair of running shoes would be donated to under-privileged children across the country.

A total of 4,000 shoes are expected to be donated. Managing Director of Nestle Ghana Limited, Freda Duplan, said that the donation would be done in collaboration with the Ghana Health Service in November this year. Minister of Youth and Sports, Nii Lante Vanderpuye, said during the awards ceremony that the young athletes who took part in the marathon would be given special attention by the state ahead of the 2020 Olympic Games in Tokyo.

He explained that the Winneba Sports College would be revamped so that athletes could be camped there, groomed and given the chance to participate in several races so as to make them good competitors at the global level in the near future.

The 29th Accra Milo Marathon was organised by the Dansoman Keep Fit Club and sponsored by Nestle Milo, Voltic Water, Junction Mall, Hollard Insurance, Duraplast with the Ghana Police Service coming on as partners. The marathon was run under the theme “Every Champion Starts By Taking a First Step”.