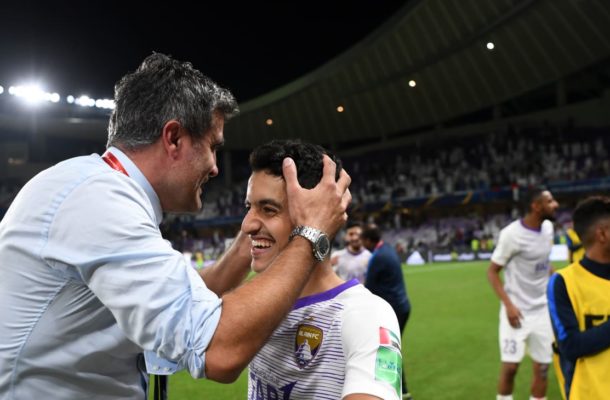 
A 5-4 penalty shootout victory over South American champions River Plate saw Al Ain become the first Emirati side to reach the final of the tournament.

It was the second time in three matches that Al Ain were taken to penalties, with Mamic’s side showing admirable endurance given a brutal recent fixture pile-up.

And the Croatian admitted he could barely believe how deep his players were able to dig for the victory.

“I am very happy and very proud,” Mamic said in the post-match press conference. “What happened was an incredible thing. In 15 days we have played five games – it is incredible what the players did. How much energy, how much love for football, how much spirit, support for each other.

“It is unbelievable. They deserve to enjoy this moment, but only for tonight. Tomorrow we will be back in training. We have four days for recovery and we have to use them in the best possible way because it will be very tough for us.”

Al Ain become the third host nation to reach the final of the FIFA Club World Cup in its current format, following in the footsteps of Raja Casablanca (2013) and Kashima Antlers (2016). They could face Kashima in a first ever all-Asian final should the Japanese side beat defending champions Real Madrid on Wednesday.

And despite Al Ain winning the AFC Champions League in 2003, Mamic believes victory over River Plate outstrips that Continental triumph.

“It is a great, great achievement – I think the biggest result in the history of Al Ain and the country,” he said. “I am proud to be part of this success. Last year for the first time in history we won the Double, now we are in the final of the Club World Cup. When we talk about sport, it must be the greatest year for Al Ain.”

Saturday’s showpiece will be the second time a Croatian has taken charge of a major international final in 2018 after former Al Ain boss Zlatko Dalic took the national team to runners-up spot at the 2018 FIFA World Cup Russia. Mamic is now hoping he can go a step further than his compatriot in Abu Dhabi.

“I hope we are not the Croatia of this tournament because Croatia lost the final and I don’t want to lose the final,” Mamic joked. “But honestly I am very proud, what a year for Croatia.

“We’ve had World Cup second place, Luka Modric best in the world, Al Ain having success with a lot of coaching staff from Croatia. There are 14 Croatian members of staff in Al Ain, it is great thing for our small country.

“But first of all it is a great thing for Al Ain. For our fans, their support was great again tonight. I hope in the final they will be behind us like this again and all together we can make our dream come true.”

Al Ain’s improbable progress past the champions of Oceania, Africa and South America has left Mamic feeling that a shock could be on the cards in the FIFA Club World Cup final, too.

While Al Ain progress, River Plate must contend for a third-place play-off. The Argentines suffered the ignominy of being only the fourth Copa Libertadores winners to fail to reach the FIFA Club World Cup final – after Internacional (2010), Atletico Mineiro (2013) and Atletico Nacional (2016).

“You have to know how to respect the winner,” Gallardo said. “I think that you have to respect and congratulate the winner. We, clearly, are in pain for this defeat. But in no way is it a shame to lose.

“We had no fluidity. That is our team’s signature and that was a disaster. I don’t want to use this as an excuse, but that is how the game went.

“Of course, the opponent has their own merit. I don’t want to take any merit from them, but we gave them some advantages.