Man accused of being IS recruiter says he was FBI informant 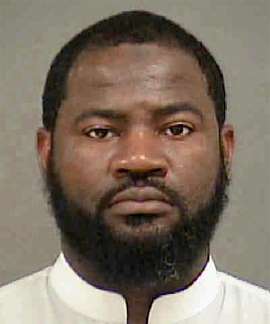 CHARLOTTE, N.C. — A North Carolina man accused of trying to recruit people to join the Islamic State group says he had been paid by the FBI since 2009 to help identify potential terrorists.

In a statement his mother delivered to The Charlotte Observer (http://bit.ly/2b42fyx ), Erick Jamal Hendricks said his code name was "Ahkie," a variation of the Muslim term for "brother."

Hendricks also said he's been outspoken against IS and all extremist groups. He added that he's baffled as to why the FBI accused him of terrorist ties.

Lisa Woods said her son dictated the statement to her in a Wednesday phone call from jail.

Hendricks was arrested Aug. 4 in Charlotte on a charge of providing material support to a terrorist group.

According to the FBI, Hendricks had communicated with one of two men shot dead by a police officer in Garland, Texas, during an attack at an event where the Prophet Muhammad was being depicted in cartoons.

An FBI affidavit details online communications between Hendricks and an undercover FBI agent posing as an Islamic State recruit who witnessed the attack at the suburban Dallas civic center in May 2015.

Two Phoenix men wearing body armor and carrying rifles drove to the center, exited a vehicle and began shooting at the entrance, authorities have said. An off-duty police officer providing security for the event fatally shot both men before they could get inside. An unarmed security guard was shot in the ankle.

The Islamic State group claimed responsibility for the attack and referred to the two Phoenix men, Elton Simpson and Nadir Hamid Soofi, as "brothers." Shortly before the attack, the 31-year-old Simpson posted on his Twitter account: "May Allah accept us as mujahideen," or holy warriors.

Simpson and Hendricks had communicated before the attack, the FBI said at the time.