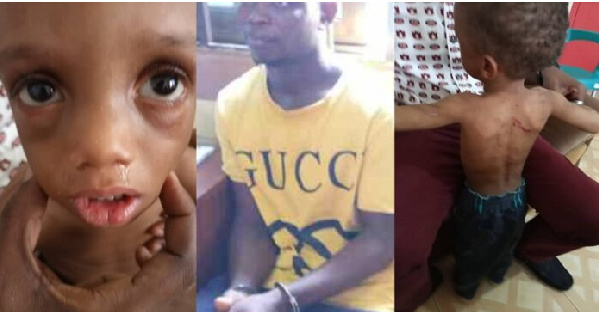 The Domestic Violence and Victims Support Unit (DOVVSU) of the Kasoa Police Command has arrested Wisdom Godwin, a Nigerian national who lives at Gomoa Budumbram in the Central Region for subjecting his 4-year-old stepson to severe beatings.

According to Blessing Rinos, wife of the suspect also a Nigerian, the suspect has consistently been subjecting the lad to severe beatings with a recent one resulting in the child going into a coma, a situation that triggered her action to report her husband to the police.

In a conversation with the victim’s mother, she told Kasapa FM News Yaw Boagyan that, the lad had blood oozing from some parts of his body as a result of the beatings leaving the poor boy with wounds on his back.

Commander of the Kasoa DOVVSU, ASP Doris Aggrey Laryea who confirmed the assault said it took the intervention of arresting officers to save the suspect from an angry mob who were already lashing the latter too for his unguided conduct against the lad.

She said, the suspect was rescued and subsequently arrested and has since been kept in police custody and assisting in investigations.

She hinted that Godwin would soon be arraigned before court.

ASP Doris Aggrey Laryea charged women whose children are being subjected to various forms of maltreatment by their husbands to report such incidents to the police as soon as possible for police assistance.