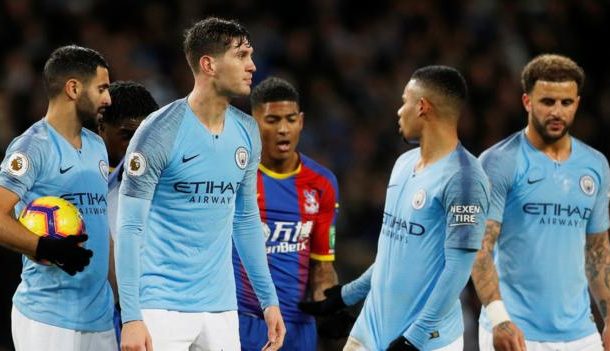 Manchester City are "probably the team of our generation" said Crystal Palace's Andros Townsend after his brilliant volley dented their Premier League title hopes on Saturday.
Townsend hit a stunning 30-yard strike as Palace won 3-2 to leave the champions four points off Liverpool.
City earned a record 100 points as they won the title last season.

"I have never played against a team as good as them, especially at home," said Townsend.

Did Townsend make Crooks' team of the week?

"It is impossible to get the ball off them."
City have already lost two Premier League games this season - the same amount as in their entire 2017-18 league campaign.
"We knew if we were going to get anything it was going to have to be a perfect disciplined performance and it saw us to a well-needed three points," said Townsend.
Palace are now six points above the relegation zone after a fifth win of the season.
Townsend's goal put Palace 2-1 up at Etihad Stadium - an effort many think could win goal of the season.
Townsend said: "Having watched it back it's probably the cleanest strike of my career and probably the best. It sat up nicely for me and as soon as it left my foot I knew it had a chance."Source: bbc.com