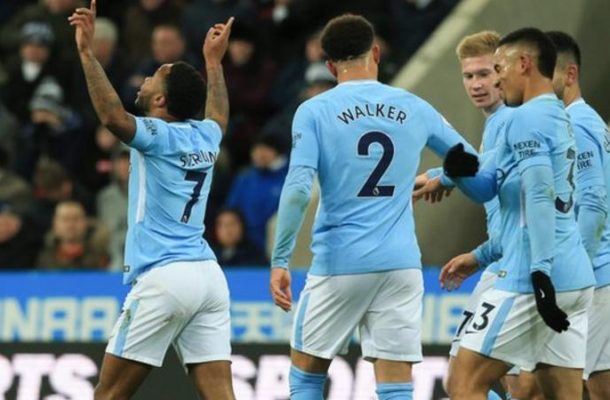 Manchester City manager Pep Guardiola said it is "difficult to play" against ultra-defensive teams after his side moved 15 points clear at the top of the Premier League with a win at Newcastle.
Raheem Sterling scored the only goal in a dominant display by the visitors to St James' Park in which they clocked up 78% of possession and 21 shots to Newcastle's six.

"We did absolutely everything but it is difficult to play when the other team doesn't want to play," said Guardiola.

"As a manager I have to adapt. We have played teams who high press, low press, attack us. Any manager and team can play how they want. And you have to find a way to beat them."

Rolando Aarons saw a shot cleared off the line by Nicolas Otamendi in a rare Newcastle raid forward before the break, but City should have been well clear after De Bruyne thumped the post and then side-footed wide in the second half.

City were not to be denied an 18th successive league victory however as they extended an English top-flight record.

The Magpies' fifth successive home defeat leaves them a point off the relegation zone.


With the very first kick of the match, Jonjo Shelvey thumped a shot at goal which was easily gathered by Ederson. But for the next 30 minutes Newcastle did not get close to another.

Instead the hosts sat so deep they were practically subterranean with lone striker Joselu playing 15 yards inside his own half.

City, brimming with confidence and well used to such tactics, sniffed out space and carved out chances regardless.

Between being denied by the frame, Aguero brought a superb one-handed stop from Newcastle goalkeeper Rob Elliot.

The home fans were reduced to cheering throw-ins as their side's possession statistic stayed stubbornly south of 20%.

To hold out would have been one of the great rearguard actions. De Bruyne ensured it wasn't to be. Allowed space and time 40 yards from goal, the Belgian scooped a sublime pass onto Sterling's instep for his team-mate's 13th Premier League goal of the season.

'A Championship side playing in the Premier League'


After surviving a raft of City chances, Newcastle gave the leaders some concerns in the final 15 minutes.

Manager Rafael Benitez brought on Gayle and Atsu, urged his side to press higher and generally threw caution to the wind. A home point would have been a heist of the highest order.

Benitez is the most streetwise of tacticians but the Spaniard is hamstrung by a squad that lacks the quality that comes with serious, sustained investment.

The prospect of relegation hangs over the takeover talks between owner Mike Ashley and British businesswoman Amanda Staveley that could be the key to a new era.

Club legend Alan Shearer, watching for BBC Radio 5 live, described his former team as "a Championship side playing in the Premier League".

Encounters against all-conquering City are unlikely to decide Newcastle's fate, but their next three league matches - against Brighton, Stoke and Swansea - will provide a better indication of which side of the relegation divide they will end up in May.


Another win, another milestone for Manchester City.

This was their 11th consecutive away victory, matching the record for the English top flight set by Chelsea between April and December 2008.

Next on the horizon is one of their manager's own.

Beating Crystal Palace away on Sunday would equal the 19 successive wins that Bayern Munich strung together in the 2013-14 season under Guardiola. No team in the English, Italian, German, Spanish or French top flights have ever managed more than that.

'We have to bring someone in' - what the managers said

Newcastle boss Rafael Benitez: "We had some chances at the end, and we expected to have to defend and play counter-attack. We needed to stay compact and defend well to play like that.

"In the last 20 minutes we did what was expected, being on top of them and expecting to press high. I am really pleased with the team in terms of organisation, but we discussed we could be better on the ball in the first half.

"We have to bring someone in to help the team but still have a lot of confidence in the team."

Manchester City boss Pep Guardiola: "Any manager can decide what he wants - I prefer to try to play but I respect a lot what opponents do and we have to try to discover how to attack against them.


"Always you have to expect this kind of situation - and it is not always easy to maintain that level.

"Raheem Sterling is scoring a lot and is playing good - so we are happy with that."


Newcastle play Brighton at home at 15:00 GMT on Saturday, with Manchester City travelling to Crystal Palace on New Year's Eve at 12:00.