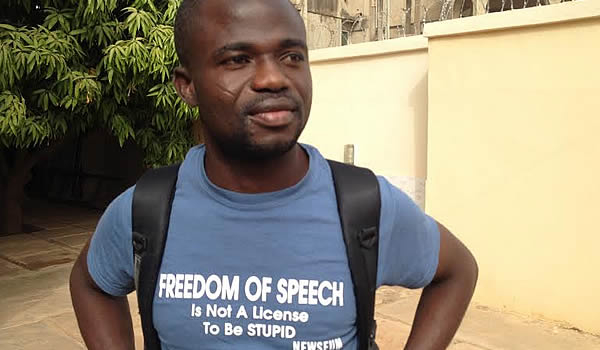 Notwithstanding the successes he has chalked, as a result, it must also be emphasized that there have been several instances the investigative journalist has misfired.

One such case of misfiring, which has led to a massive dent of his credibility and his ability to be a man of his own and be true to facts, was in a speech delivered at a dialogue series held by the Chevening Alumni Association of Ghana on the theme, ’’Corruption and its impact on Ghana, 61 years on’’ held on the 17th day of March, 2018. On the day, he made some allegations against the President of the Republic, Nana Addo Dankwa Akufo-Addo, which, unfortunately, are not back by the facts.

Manasseh had this to say: “President Akufo-Addo has to stop acting like a clearing agent. We know what a clearing agent does, he needs to allow due process to be followed in dealing with corrupt allegations. If that is not done, people will not trust him.’’

The investigative journalist went on to enumerate a couple of alleged corrupt cases which have been reported under this administration, to back his claim that the President is acting like a “clearing agent” and has not allowed investigations to be carried out on alleged cases of corruption against members of his administration.

Manasseh cited the allegation against the Minister for Energy, to the effect that the latter bribed Parliament’s Appointment Committee to have him passed through vetting without any restrictions or hinderances.

It is baffling how Manasseh Azure would make the claim that President Akufo-Addo ‘cleared’ the Energy Minister, Mr. Boakye Agyarko, when Parliament itself set up a bi-partisan committee which delved into the allegations of bribery against him. Hon. Mahama Ayariga and his partners in crime, Hon. Samuel Okudzeto Ablakwa and Hon. Alhassan Suhuyini woefully failed to produce any iota of evidence to substantiate their claims.

Even Hon. Muntaka Mubarak, the Minority Chief Whip, ferociously denied that monies had changed hands. Parliament, by its own means, determined that the allegation by some members of the Minority was a figment of someone’s own imagination. The culprit, Hon. Mahama Ayariga, issued a public apology in this instance (https://www.myjoyonline.com/politics/2017/april-7th/ayariga-formally-apologises-for-false-bribery-claim.php).

Where is the interference Manasseh is highlighting? Where, in this case, did President Akufo-Addo act like a “clearing agent”? Manasseh, the Ghanaian people want to know. We don’t want to believe that you peddled a falsehood.

Again, Manasseh, for tendentious reasons, alleged that the President acted as a “clearing agent” when the two Deputy Chiefs of Staff were accused of having indulged in corrupt acts by musician, A Plus.

Has Manasseh forgotten that it was President Akufo-Addo who asked the Criminal Investigations Department of the Ghana Police Service to take up the case and investigate it thoroughly? Were the findings of the investigation not made public? The accuser, A Plus, on his own came out and apologized to the two Deputy Chiefs of Staff for making those baseless accusations (https://www.ghanaweb.com/GhanaHomePage/NewsArchive/A-Plus-apologizes-to-Asenso-and-Jinapor-586655).

Manasseh, where, in this case, did President Akufo-Addo act like a “clearing agent”? It is incomprehensible how a seasoned journalist like Manasseh Azure Awuni would walk on a path that dents his credibility!

It is paradoxical, to say the least, why Manasseh could rope President Akufo-Addo into a matter completely worlds apart from his jurisdiction, as regards the NDC-invented ‘cash for seat’ saga. After requesting details of the matter from the Trade Minster, and having satisfied himself that Alan Kyerematen had done no wrong, the matter was still referred to a bi-partisan probe of Parliament.

The Speaker admitted the demands from the Minority to set up a bi-partisan committee to sit on the case when Parliament was on recess. The Committee came out with its report to the effect that the Trade Minister had done wrong. Myjoyonline carried the story.

If Manasseh cared to find out, he would know (https://www.myjoyonline.com/politics/2018/February-6th/cash-for-seat-probe-exonerates-alan-cash.php). Manasseh, again, where, in this case, did President Akufo-Addo act like a “clearing agent”?

Indeed, all allegations of corruption leveled against appointees of this government have been thoroughly investigated by independent bodies and the results made public.

That is the more reason President Akufo-Addo said this when he met the press one year into office:

“So far, every single act of alleged corruption labeled against any member of my administration has been or is in the process of being investigated by independent bodies and the findings so far made public. From the allegations against the Minister for Energy designate and his parliamentary confirmation hearings to that against the CEO of BOST, there is those against the two deputies of Chief of Staff to the claims of extortion against the Trade Minister, and those against the Minister for Special Development Initiatives, they have all been investigated and no evidence has been adduced to suggest imaginary any act of corruption”.

There’s no President eager and willing to fight corruption than President Akufo-Addo. In his first year of office, two separate by-partisan probes in Parliament were established to inquire into allegations of corruption as against zero in the Mahama years, despite the persistent calls by the then Minority.

As the President said, “I have a great interest in my appointees not been corrupt and any critic could possibly have. Produce the evidence to back the allegations and see what the reaction would be”, he stressed.

Manasseh Azure’s works would fade into oblivion if he continues to just throw his weight about in this manner. This devil-may-care attitude he has adopted cannot in any way help him in advancing his career. He will fall from grace with this posturing.

This propaganda-induced phrase he is running wild with is below a person of his calibre. He should not allow himself to be consumed by the vile and fabricated lies opposition elements throw out there. His description of the President as a clearing agent is reprehensible, ignobly contemptible and pitiably pathetic. Source: P.K Sarpong, from the corridors of the Thinking Place