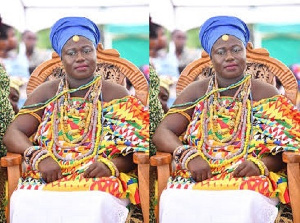 Nana Aplam II is the paramount queen of the area

Sources close to the Manya Krobo Paramountcy say the Paramount Chief before a meeting of chiefs and elders of the Area on Monday, May 11, 2020, announced the immediate destoolment of the queen mother for “betrayal.”

Reasons for the destoolment of the queen mother are linked to her recent marriage to a man from the Manya division.

The queen mother recently got married to her husband who hails from the Manya Division headed by the Divisional Chief of the Area, Okpatakpla Nene Sasraku IV who together with five other Divisional Chiefs in October, 2019, declared their autonomy from Nene Sakite II and elevated all six Divisional Stools to independent paramountcies without the approval of Nene Sakite who is the Overlord of the Manya Klo State.

Her marriage to a Lawyer (name withheld) from one of the breakaway paramountcies, according to sources, did not go down well with the Paramount Chief who summoned her before the chiefs to announce her destoolment.

The Konor, therefore, took the decision to destool her in the presence of other chiefs as he condemned the conduct of the Queen Mother, describing her as unfit to hold herself as paramount queen mother of the Manya Krobo Traditional Area.

Though many of the chiefs reportedly disproved of the Chief’s decision, none could openly challenge his verdict.

A close source to the queen mother confirmed the story and indicated the Queen’s resolve to seek redress.

“Everything you’ve heard is true,” said the source without elaborating further. “The queen was summoned before the Chiefs and her destoolment announced to her.”

Public Relations Officer of the Manya Krobo Traditional Council, Nene Asada Ahor when reached for his response to the issue failed to confirm or deny except to say that the Council would respond appropriately and in due course.

It’s unclear if the queen mother’s marriage is a sacrilege to merit her destoolment or if the destoolment process received any customary validity.

If her destoolment holds, she’ll go down in history as the first Queen Mother to be destooled in the traditional area.

If this decision is upheld, the Kingmakers of the Manya Krobo Traditional Area are under customary obligation to present a new candidate for installation as queen mother of the area.

Privately known as Grace Asare, Nana Aplam II was installed the queen mother of the Manya-Krobo Traditional Area in 2015 as part of the annual Ngmayem Festival at Odumase-Krobo.

She succeeded the former queen mother of the area, Nana Mamle Okleyo, who died in 2012.