Marcus Rashford to Have Shoulder Surgery, Out Until October 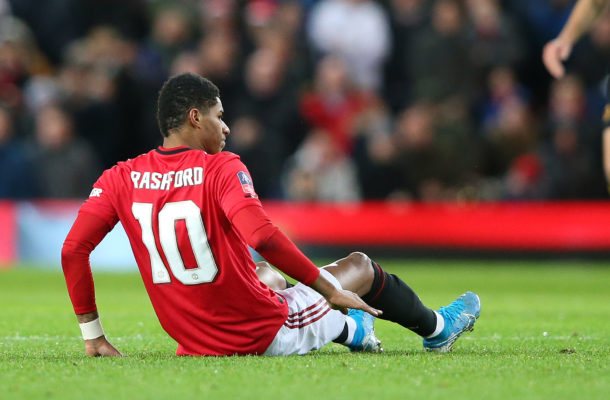 Is Marcus Rashford’s absence going to cost Manchester United in the start to their 2021-22 Premier League campaign?


Marcus Rashford is to have surgery to resolve a longstanding shoulder injury in the coming days and he’s likely to miss the start of the Premier League season as a result. The news was confirmed by the club on Friday.

The statement issued by the club said “Following consultation between Marcus, the manager, club medical staff and specialists, Marcus will undergo surgery imminently to resolve his shoulder injury. He will now focus on his rehabilitation in order to return as soon as possible.”

Rashford’s absence is a blow to Manchester United’s upcoming Premier League campaign, which is set to get underway on August 14 against Leeds at the Old Trafford.

The Manchester United striker had a decent season in 2020, netting 21 goals and assisting on 15 in 57 outings for the Red Devils, although he was dealing with ongoing shoulder and foot issues throughout the club’s campaign and the 2020 Euros in which the Three Lions reached the final before losing to Italy on penalties.

Manchester United gave their prized striker their support to answer the call of national duty before undergoing surgery, knowing all the while that playing for England would ultimately delay his surgery and subsequent rehabilitation to the detriment of their upcoming season.

The decision to have surgery merely two weeks before the season is set to get underway is understood to have been reached by both Rashford and the club with manager Ole Gunnar Solskjaer stressing that the interest of both the player and club were at the heart of the decision.

"He will now focus on his rehabilitation in order to return as soon as possible," United added in its statement. The England international could be back training five weeks after his surgery but it’s going to be at least 12 weeks before he sees action on the field for the Red Devils. This also means that Rashford is likely to miss England’s world cup qualifiers during this period.

Man United, tipped amongst the top four faves according to betanysports to win the Premier League title in 2021-22, confirmed on Friday that Rashford would be going under the knife, ending any speculation about the strikers status.

The 23-year-old wanted to have surgery immediately at the conclusion of the Euro 2020 final with Italy but he was made to wait for the availability of the requisite surgeon.

Rashford admitted last month that he felt his shoulder issue hampered his form during the 2020-21 Premier League season.

"Obviously I am not performing at my best and what I know I can perform to," Rashford said immediately after the Euros, in which he made five substitute appearances, including the final minute of extra time in the Euro final with Italy.

Taking to social media this week, he also sought to explain the timing of his decision. Rashford cited the need to listen to his body as the primary reason why he’s opted to get surgery now and to guarantee he can play football for as long as possible.

“To guarantee I can play this game as long as possible I need to listen to my body, “ wrote Rashford. “Everyone has an opinion but nobody knows my body better than me.”

Delaying surgery has caused a backlash for the Man United striker, over and above the vile racist online attacks he and his fellow teammates Bukayo Saka and Jadon Sancho received after they all missed penalties in England’s Euro defeat.

"I've read some call me selfish for holding off getting the surgery this season but it was never about putting myself first and that's how we've reached this point, and something as a 23-year-old I've had to learn the hard way.

In response to criticism that he’s received for delaying surgery in order to represent his country, Rashford talked about how no words could describe what an honour such an opportunity is for an athlete.

“It’s hard to describe the feeling of representing your country. Given the choice, no one would ever turn that down at such a big tournament. As a little boy or girl you dream of those moments. I had been deemed fit for the full season, and given my injuries were being managed, what was another couple of weeks?”

He added that while he was “managing the pain, I was training well and found a lot of comfort in the England camp after the Europa League final.

“On hindsight, if I had known I wouldn’t have played a significant role in the Euros, would I have gone? Hindsight is a wonderful thing isn’t it….”