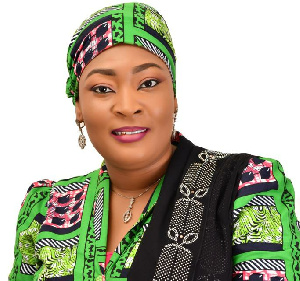 The contest for the New Patriotic Party (NPP) seat in the Yendi Constituency is getting hotter by the day as the December 7, 2020, Presidential and Parliamentary elections draw nearer, and key contenders in the governing party’s primary, employing various strategies, including inferior tactics to undo one another.

At the center of the Yendi contest is Farouk Aliu Mahama, son of the late Vice-President, Aliu Mahama and head of Procurement at Ghana Cocoa Board, who is in fierce competition with the Deputy Chief Executive Officer (CEO) for Microfinance and Small Loans Centre (MASLOC), Hajia Abibata Shanni Mahama Zakariah.

Indicative of how heated the Yendi NPP primary is, yesterday, Ghanaians were treated to pictures showing bundle of cash being offloaded from the booth of a car said to be that of the deputy MASLOC CEO, who was sharing money to the constituents to influence their votes, but the claim is turning out to be a hoax with suspicions pointing to Farouk Mahama’s camp as behind the circulations of the pictures and writeup that accompanied it.

The Herald was informed by Hajia Abibata that what took place yesterday, was new procedure the current management of MASLOC has adopted across the country to hand over the monies to the beneficiaries directly to be able to know them, get their details and be able to trace them when the time for repayment comes.

The strategy is said to be a departure from the previous procedure, where it was difficult to track down defaulters, because they were mostly unknown to the management of MASLOC.

A write up accompanying the pictures which went viral had said “Hajia Abibata Shanni Mahama Zakaria, one of the NPP Parliamentary candidates for Yendi; who doubles as the Deputy MASLOC CEO is found this morning at Yendi SHS, sharing MASLOC money to some selected women (delegates) for personal gains, adding “this gesture comes at a time, she is seeking their votes to represent the NPP in the Yendi Constituency”.

It said “this was done without recourse to the social distancing protocols as was announced by the President on 16th March, 2020”.

“This is how Ghana’s money is shared by some self-seeking individuals(appointees) of government. Meanwhile, health workers are crying for PPE’S to enhance their fight against Covid-19 for lack of money. But a candidate can get money and share to women for her personal gain, under the cover of being MASLOC Deputy CEO”.

However, a counter write-up sent to The Herald explained that, the Parliamentary aspirant, Hajia Abibata Shanni, only led disbursement team to disburse over One Million Ghana Cedis (GHc1,000, 000.00) to 30 groups and some individuals in the Yendi Constituency. She did so in her capacity as Deputy CEO in charge of the Northern Sector.

It further said that, Hajia Abibata, as part of her quest to serve the Yendi people and alleviate poverty in the whole enclave through personal and economic empowerment led the team to disburse the funds to 776 beneficiaries, the first time in the history of MASLOC to have disbursed Funds to such magnitude in the Northern region.

The deputy CEO was captured as emphasizing the need for the beneficiaries to judiciously use the funds, especially during the farming season, which is the major occupation in the north to enable them build their livelihoods and businesses.

It described the occasion as joy-filled with all beneficiaries expressing happiness for the kind gestures of Hajia Abibata, and pledged to invest the funds carefully, so they can pay back on time and also grow their enterprises.

It denied claims that there were no social distancing saying “in compliance with the social distancing protocols, the thirty groups were divided in to 3 batches with each batch consisting of 10 groups occupying 10 canopies with each canopy containing 25 people”, adding “this was dealt with in three separate sessions with veronica buckets for hand washing, tissue, liquid soap, sanitizers, hand gloves and face masks were provided to all participants”.

Meanwhile, speaking to The Herald yesterday, Hajia Abibata said: “to be honest with you, you know MASLOC our operations, when we are doing disbursements, we take cash and go and give to beneficiaries and then it works in a way that I handle the Northern sector and I am aspiring as a Parliamentary candidate for Yendi Constituency definitely you have opponents there so any attempt to do anything good, they will also come with these kinds of things”.

According to her “I have friends in the NDC who, some NDC friends of mine called me and told me how my opponents had sent some messages to them to put it out there and some of them had already started sharing. Unfortunately, we got late so by the time we got there to respond, some of them had shared and then we had to put a stop to it and told them the person contesting with me so they should stop and stay away from our internal contest”.

“That is Farouk, Farouk Aliu Mahama; he is the man behind it. To be honest with you haven’t done anything wrong, I have not gone against our operations, I was present, I didn’t hand over money to any beneficiary directly, I was there to observe just as I observed other constituencies and Yendi is not the first Constituency that I have been to”.

“I have gone to other constituencies in the north, in the south; we went to Kumasi Central market with my CEO, exactly what we did in Yendi today that was what we did in Kumasi. So it is not something that I have done out of our way”.

Hajia Abibata said “I have seen so many posts which don’t make sense… Because even this COVID time the President is thinking of boosting SMEs so if I am disbursing money to the people for them to put to productive use, how is it offensive? We haven’t done anything outside our operations”.

“Actually, what happens is that, we even deposit the money into their accounts so their group leaders go to withdraw the money themselves so we supervise so once the money is in their accounts it is no longer MASLOC’s. Because they went with the car like I said it is huge 30 groups”.