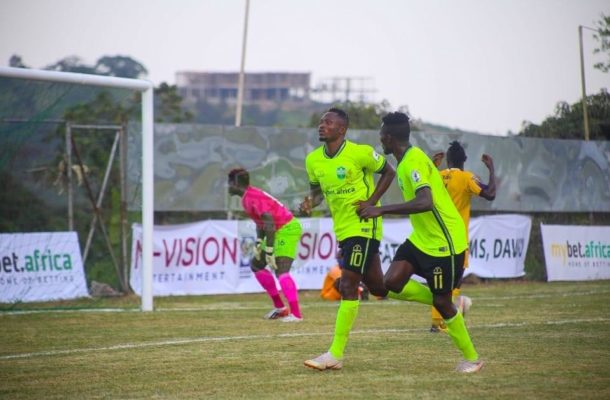 Medeama were tagged as favourites for the 2020/2021 Ghana Premier League season after their impressive run in the 2019/2020 season.

But after two games in the Ghana Premier League, the table looks grim looking for Medeama SC as they were consigned to a 2-1 defeat at the Theater of Dreams Park in Dawu.

It was the away side Medeama who were quick of the blocks in the initial stages of the game forcing Dreams goalie Solomon Agbesi into two smart saves.

The home side took a bit longer to settle into the game as Justice Blay was very dominate for the away side in the middle of the pitch.

Medeama were playing a high defensive line forcing a Dreams FC to resort to long balls to find Joseph Esso and Agyenim Boatneg who were leading the line for them.

This caused a lot of offside calls for Dreams FC but one such long ball in the 14th minute gave Jospeh Esso the chance to beat Ibrahim Yaro before slotting past Ofori Antwi to open his Dreams FC account.

Medeama came out the better of the two sides making several changes to their side and it was a former Dreams FC player Kwadwo Asamoah who restored parity for the away side after a mix up in the Dreams FC penalty box.

Late in the game Joseph Esso was adjudged to have been fouled in the box and the resultant penalty was steered home by Ibrahim Issah to give Dreams FC all three points.