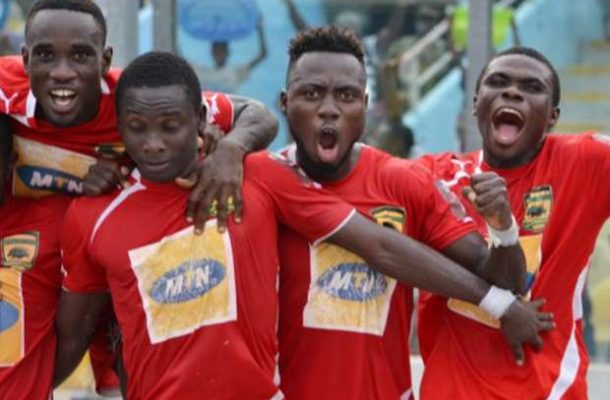 Asante Kotoko gave their chances of lifting the Premier League a shot in the arm after defeating Liberty Professionals 2-0 in Dansoman on Saturday.

Dauda Mohammed and Eric Donkor scored in each half as the Porcupines raced to the famous victory at the expense of Scientific Soccer Lads.

In an exciting first half which saw both teams go at each other creating decent chances, it was Kotoko that shot into the lead with five minutes to end the half courtesy a superb goal by 'Bandit' striker Dauda Mohammed.

Liberty had dictated the opening minutes and made decent incursions into the half of Kotoko. They found the back of the net only to be ruled out by referee - as a kotoko player was fouled before the goal was scored.

Kotoko quickly upped their game. They changed the mentality to a more attacking approach, seizing the midfield and throwing men forward. Dauda Mohammed on two occasions almost opened the scoring for Kotoko.

His defeleted cross in the 14th minute almost caught Liberty goalie off guard before He cut in and curled one in but the Liberty shot stopper was again equal to the task as he saved what would have been a brilliant goal.

But the goal finally arrived and it came as no surprise as the Porcupines broke the deadlock. Mohammed like a fox in the box latched onto a lose ball and hit a shot with his left foot for the opener.

Liberty attempt to grab the equaliser proved futile as the absence of top scorer Latif Blessing had a telling effect of them.

The young forward failed to pass a late fitness test. And it was to kotoko's advantage as they doubled their lead through Eric Donkor much to the delight of the teeming Kotoko fans who made the trip down south.

Kotoko held onto to the precious two goal to record second victory in succession which has put them back in contention for the ultimate.

They are now fourth but only two points adrift off League leaders WA All Stars who succumbed to a 1:0 defeat at the hands of Ebusua Dwarfs.