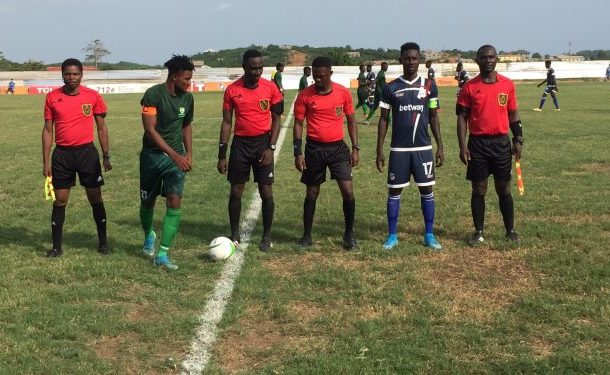 Liberty Professionals made sure that they did not go back to Dansoman empty handed as they picked up a deserving point in their match day two game against Elmina Sharks at the Ndoum Sports Complex.

The home side started the brighter of the two teams and but struggled to break down the resolute Liberty backline.

But that did not last long as skill forward Benjamin Tweneboah opened the scores of the game in the 27th minute with a fine strike.

It sparked Liberty Professionals into life but there were unable to convert the half chances that came their way into goals as Elmina Sharks went into the break with a slender one nil lead.

The scientific soccer lads came back stronger of the two teams and their attacking impetus worked magic for them as they earned a penalty after a foul in the box but captain George Ansong blazed the penalty wide.

It did not dampen their spirits as they still pressed on for the equalizer which eventually arrived deep into stoppage time when substitute Kweku Karikari netted to hand Liberty Professionals a point.

Liberty on match week three will host Techiman Eleven Wonders at the Carl Reindorf Park  while Elmina Sharks will travel to Sogakope to play WAFA.