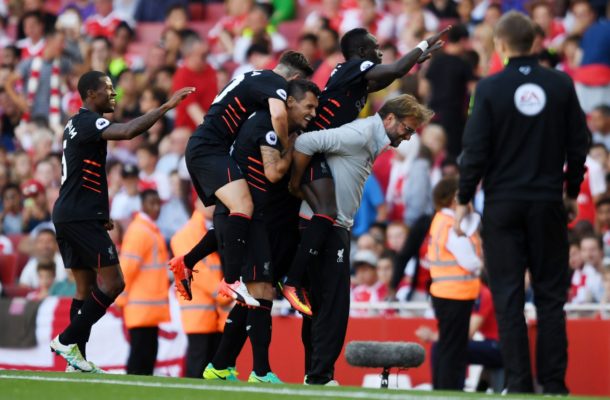 Liverpool Football Club kicked off their 2016/17 EPL season by holding off Arsenal in an end to end 4:3 thriller on Sunday which could have seen The Reds' wonderkid, Phillipe Coutinhio grab a hatrick

Arsenal saw more of the ball in the opening 10 minutes with Klopp's charges giving the ball away more often than not. The London club had the first real opener of the game after Aaron Ramsey shot straight at Liverpool shot stopper Simon Mignolet in the 7th minute.

Liverpool new signing, Sadio Mane looked to bring his side into the action through a well worked free kick which saw the Senegalese' volley well blocked by the rather inexperienced Arsenal defence.

Arsenal should have taken the lead in the 29th minute but Walcott's penalty kick was kept out by Mignolet who dived the right way and kept the scoreline at 0:0.

But the Arsenal man would make amends only 68 seconds later in the 31st minute with a low right-footed shot into the far corner after Moreno was caught off position. 1:0 Arsenal.

Liverpool poster boy Coutinhio gave the perfect response with a breath-taking 30 yard thunderbolt of a freekick into the top corner in added time just as Arsene Wenger's side looked like they were going for the break with the lead.

Liverpool started the second half looking like wounded lions as they pressed high up field and got the reward for their persistence through Adam Lallana whose inch perfect control and finishing got the better of former Chelsea stalwart goalkeeper Petr Cech. 2:1 Liverpool.

The Reds held the game by the neck after their lead with a great spell of possession leading to a third for them and second for Brazilian wizkid, Coutinhio. A sumptuous volley from the lad. 3:1 Liverpool.

Arsenal's woes deepened as new signing Sadio Mane made it 4:1 for his first EPL goal for his new team. Arsenal's defence were left torn into bits as the Senegalese raced away from Chambers down the right flank, showed good strength to carry the ball in the box and slotted it into the disvirgined Arsenal net.

Perhaps Iwobi's injury may have been a blessing in diguise as substitute Oxlade Chamberlain pulled one back for Arsenal in the 65th minute to make it 4:2 to Liverpool. A life line for the gunners.

Liverpool's standout performer,Coutinhio got cramped and forced Klopp into a substitution in the 69th minute. The absence of the Brazilian's influence on the pitch was felt almost immediately as the gunners pulled another goal back through Chambers' 75th minute header. 4:3 and game is on.

The gunners looked favourites for the leveller but could not find a way past Liverpool's backline after their 3rd goal.

As predicted, a goal galore in the London clash but an unfamiliar victory for the Merseysiders who prior to this game had won just a game over the past 15 years at Arsenal.