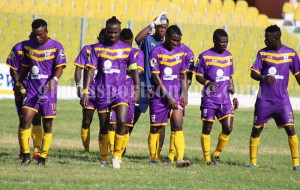 Medeama are alleging an explosive conspiracy against their top-four ambitions ahead of their decisive final Premier League game against Ashantigold at home on Sunday.
The Yellow and Mauves are claiming there is a clandestine ploy to frustrate their bid to end in the prestigious top-four position.

The 2016 CAF Confederation Cup campaigners are alleging top officials of the Ghana League Clubs Association (GHALCA) are mapping out strategies to frustrate their bid by using referees to undertake their 'wicked and crude' act.

They claim the club's umbrella top hierarchy have hatched a plan to ensure they are 'robbed' at home to give leeway to giants Kotoko and Hearts to sneak into the top-four.

The move according to the club is intended to give GHALCA a perfect opportunity to seek for big sponsorship to revive the 'dead' GHALCA top-four competition.

"We know that there are moves to ensure that we're robbed at home so GHALCA can have their Hearts and Kotoko finish in the top-four," a source told GHANAsoccernet.com

"They (GHALCA) have been told by top companies that without Kotoko and Hearts in the top-four, they will struggle to get sponsorship.

"So some of them are doing everything possible to ensure that we lose at home against Ashantigold. But that's not going to happen.

"We all know Kotoko will beat WAFA and Hearts will beat New Edubiase. Everything has been planned. We can all pretend but we know that's what is going to happen.

"They know we hold superior head-to-head advantage over Kotoko and so the only way they can upstage us is if we lose and they win.

The source further claimed: To be fair, it's got nothing to do with Kotoko or Hearts but some top men at GHALCA who are bent on ensuring such a wicked and crude tactics are deployed.

"If they want only Kotoko and Hearts to play in the league they should tell us so we all stop playing the game. We have been robbed at home this season and we're not going to allow it to happen again.

"So the referees who are being used as conduit should be careful that they don't sacrifice professionalism for a token. Posterity will judge them. We are waiting for them in Tarkwa." he warned.

Medeama are tipped to finish in the top-four after an impressive campaign this term and a win over Ashantigold at the Tarkwa and Aboso Park will ensure their passage.