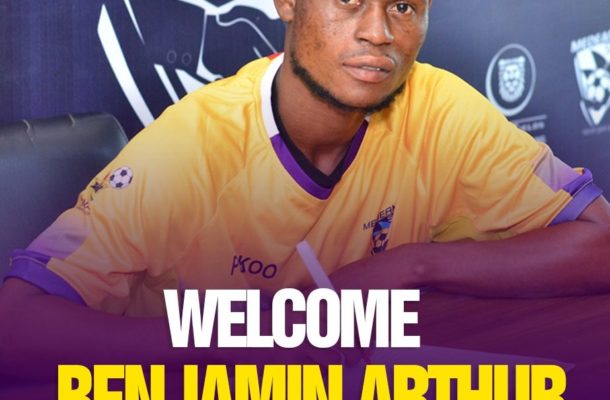 He joins on a two year deal after passing his medicals and agreeing personal terms with the mauve and yellow.

"Medeama is delighted to confirm the signing of midfielder Benjamin Arthur on a permanent contract." the club announced.

Arthur, 27, has signed a two-year deal with the Mauve and Yellows after ending his stay at Elmina Sharks.

He becomes the latest addition to Medeama following the capture of winger Zakaria Mumuni.

Arthur has been a key cog of Yaw Acheampong’s side at Elmina Sharks and is expected to bring stiff competition to the team’s midfield.

“Ben is a brilliant player and we’re happy to have him join the group,” coach Samuel Boadu told medeamasc.com

“He is a top quality player who will be an exciting addition to our talented crop of players.

“Hopefully he can hit the ground running and contribute significantly to the Medeama project.”

Benjamin Arthur said: “I am excited to be here as I open a new chapter in my career,”

“I want to thank coaches, officials, former colleagues and fans of Elmina Sharks for an amazing years at the club.

“They understand that a man must move on at some point in life. I am grateful for what we managed to do at Elmina.

“Now its time to shift focus on Medeama and contribute my bit to the success of this great team.

Ben won’t be available for Medeama's Premier League match against Eleven Wonders at home on Wednesday but should be ready for the final game of the first round against Chelsea in Berekum.